Home > My Agenda > The Jewels of Tutankhamun 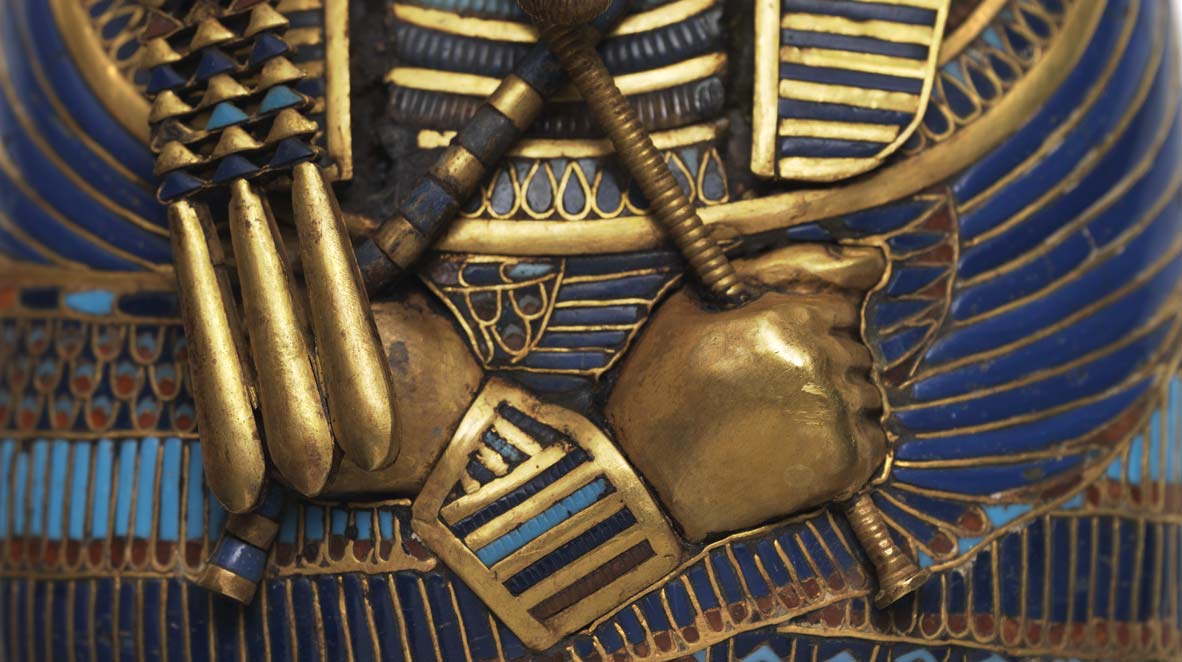 The exhibition “Tutankhamun – The Pharaoh’s Treasure” presents 150 pieces, including 20 necklaces, bracelets, rings and earrings, discovered on the mummy. A review of the sumptuous funeral trousseau of this young pharaoh.

In 1922, when Howard Carter unswaddled the Tutankhamun mummy, which had remained almost intact for 3300 years at the bottom of the Valley of the Kings, he discovered thousands of objects, including jewelry. Not all of them were worn by the mummy: some were simply placed on it, others entangled in the endless linen strips wound around it. It would seem that very few of them were actually worn by Tutankhamun during his lifetime. They were not there to look pretty, or to leave a testimony: like the other objects, they ensured his passage to the great hereafter.

The exhibition features a stylised, black sarcophagus, legs joined, arms crossed and hands inlaid with gold. It is wearing a necklace decorated with a beetle and a breastplate shaped like a bird with a human head. Its lobes are pierced because Tutankhamun probably wore earrings as a child. The sarcophagus is girded with eight bands that originally held the shroud: formed by a series of gold plates, decorated with hieroglyphics and encrusted with blue and red… Arranged around are seal rings and at its feet, amusing finger covers and sandals in gold, an omnipresent precious metal that symbolizes the imperishable flesh of the gods.

In a world governed by the prayers and formulas of the Book of the Dead, each jewel has a defined place, everything has meaning, everything is a symbol. The breastplates, true masterpieces, are used to protect the heart and lungs. These hypertrophied necklaces are made up of rows of pearls, gold plates encrusted with blue, red, and turquoise. They depict vultures and solar falcons (representations of the goddesses of Upper and Lower Egypt) with their wings outspread, gripping with their claws rings that symbolize eternity. The lunar boat and the beetle, pushing a cornelian solar disc, are ubiquitous. On these extremely elaborate necklaces where the smallest square millimeter has meaning, the clasps take the form of symbolic birds of prey.

Of the 150 jewels found on the mummy, 20 amulets were hung around the neck with a gold thread or interposed in the layers of strips. Adorned with emblems of life, strength, eternity, beetle, protective eye, vulture, these tiny jewels or religious objects highlight the limited range of materials used in particular. Unaware of the existence of diamonds, rubies and sapphires, the Egyptians used colored glass, which was then of inestimable value, cornelian, turquoise and lapis lazuli from Afghanistan. No matter how small, such amulets also give us an imaginative insight into the life of the pharaohs.

The incredible work of the goldsmiths

On the pendant representing Tutankhamun, the goldsmiths have reproduced the facial features, the folds of the costume, and the round prints on the bronze discs fixed on his leather crown, with incredible precision. The joints of the finger covers and hemp fibers woven from the sandals, are very realistic. Their miniaturized cloisonné work stands out particularly on the wings of vultures and falcons. With infinite meticulousness, they also worked the solid gold backs, imitating each feature in detail. The beetle’s belly looks like that of a real beetle.

It would be so easy to be blasé about this Egyptian esthetic, which has seen so many revivals: following Napoleon’s Egyptian campaigns, during the Art Deco period and in the 1970s. But in this sublime exhibition, the magic is more powerful than ever.