Home > My Agenda > Tempting jewelry at the Christie’s Paris sale 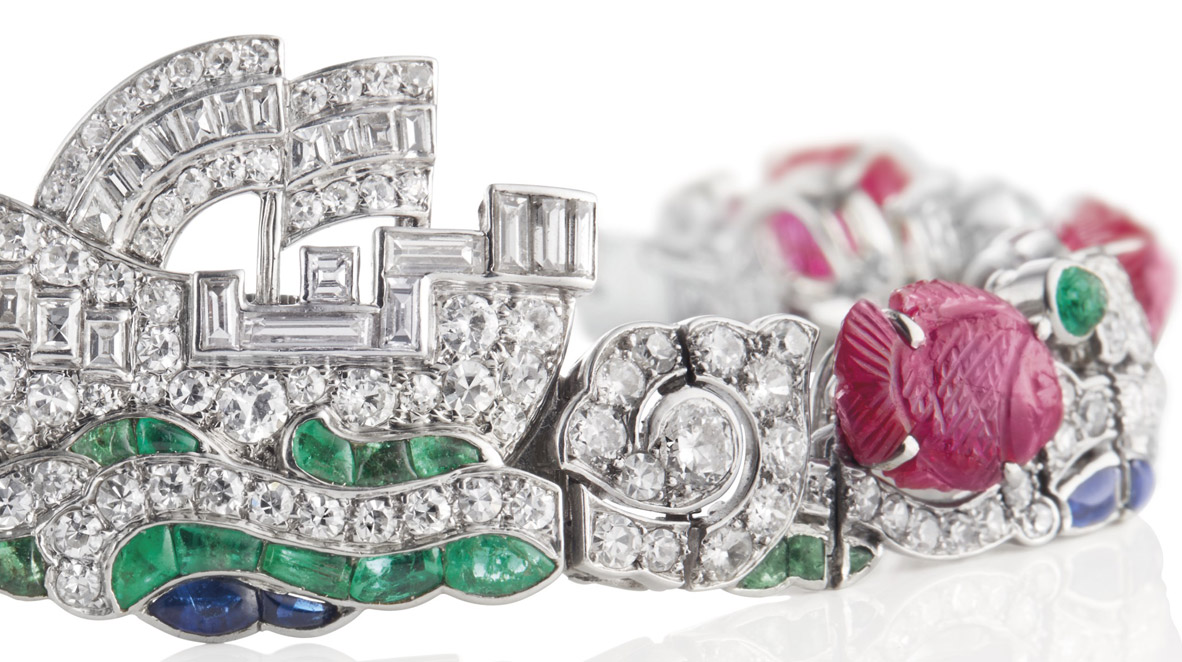 Christie’s jewelry department director Violaine d’Astorg has brought 269 lots together for a sale in Paris on June 13. Here are some of the most tempting treasures.

The star pieces in the sale consist of various chokers (necklaces halfway between a pectoral and a torc). Of the ten or so on offer, the oldest, composed of geometric forms in silver and gold, was produced by Jean Desprès during the 1920s/30s. Most date from the 1980s, the golden age of the choker, and come in chrysoprase with Egyptian motifs; pearls and mother-of-pearl; gold with elephant motifs, and so on. The most spectacular, by Cartier, dates from the late Eighties and has an estimate of €200,000 (the highest in the sale). It consists of rows of stylized scales paved with white diamonds: a monochrome already heralding the minimalism of the 1990s.

What a joyous, mischievous ark full of appealing beasts with precious feathers and gleaming coats! A Van Cleef & Arpels duck sports an onyx and lapis lazuli patchwork suit; a pair of Boucheron ladybirds black-spotted red enamel dresses. A Van Cleef & Arpels cock, standing proud on his spurs, is garbed in glittering emeralds and diamonds, while a Vhernier turtle in superimposed mother-of-pearl, lapis-lazuli and rock crystal vies with the beauty of the other contemporary piece: a butterfly brooch by Sylvie Corbelin with real varnished wings.

An Art Deco bracelet by Mauboussin

The Christie’s Paris sale features two Mauboussin bracelets. The catalogue cover features a photo of one with a micro-watch case concealed in engraved rubies, diamonds and emerald cabochons. “It deserves pride of place because it is an impressive example of Art Deco and French expertise, then at its peak,” says Violaine d’Astorg. The other is part of the customizable “Reflexion” collection, where geometric forms are assembled to suit the customer’s taste. Made in collaboration with the American jeweler Trabert & Hoeffer for the Park Avenue store, it reminds us that Mauboussin was one of the best at the time, on a par with Boucheron and Van Cleef & Arpels.

In this Christie’s Paris sale six pieces once belonged to famous women. The most touching, and also the oldest, is Louise de la Vallière’s bracelet with a portrait of Louis XIV painted by Petitot. It was the first piece of jewelry the sovereign gave to his first mistress, whom he later abandoned for Madame de Montespan. Four pieces were owned by American heiress Aimée Croker (whose stormy life earned her the nickname “Queen of Bohemia”), including an oval pendant by Janesich, the leading Art Deco jewelry store, which closed in 1968. There is also a Boivin pearl and kunzite necklace once belonging to Hélène Rochas, wife of the couturier Marcel Rochas.

A sale would not be worth its salt without a piece by JAR (Joseph Arthur Rosenthal). This time, it will end with a 1995 necklace. His trademark micro-diamond setting enhances some subtle matching: starting with two topazes belonging to the customer, he created an ensemble of stones, apparently identical but actually of slightly different sizes. And contrary to what people think, JAR’s jewelry does not always involve astronomical sums. The sale also includes some “ready-to-wear” earrings in aluminum, his favorite material. With estimates of €1,500, €3,000 and €4,000, these provide some marvelous surprises in a sale that looks set to be thoroughly exciting on top of everything else.

The fauna jewelry in the Christie’s sale

The comeback of the 80s?