Home > My Agenda > The “Birds in Paradise”: an enchanting digression 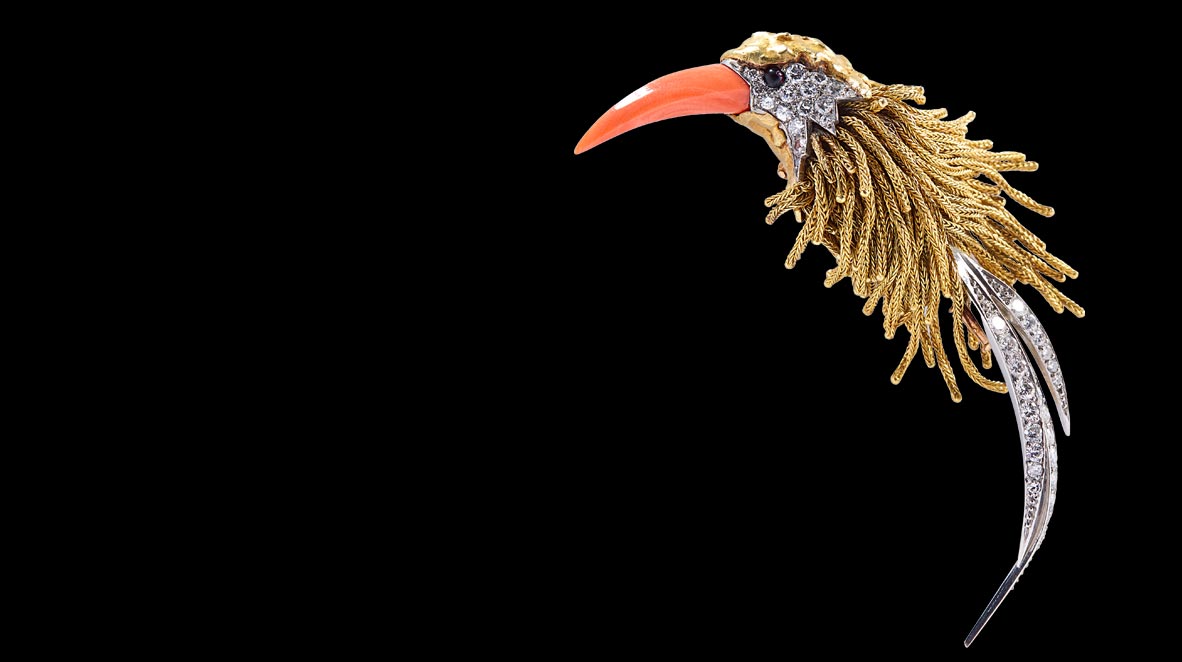 The idea for the exhibition all began with a private collection of bird brooches dating from the second half of the 19th century.  “It’s extremely rare to have so many pieces from this period with the same theme,” says Joëlle Garcia, co-curator in charge of the Cultural Diffusion and Mediation Service for the Libraries of the Museum national d’histoire naturelle. A second private collection, focused on the 20th century, swelled it with pieces by Mauboussin, Cartier, Marchak and above all a remarkable group by Pierre Sterlé. Rounded off with twenty-odd brooches from the heritage collection of Van Cleef & Arpels (the École’s patron), the whole selection dialogues with the esthetic and scientific works from the Musée Nationale d’Histoire Naturelle and Musée des Arts Décoratifs, including a 16th century manuscript, a 19th century Duvelleroy fan and a bird reserve that gave its name to the exhibition.

From naturalism to abstraction

Right from the opening exhibit, the series of birds sets the tone: the development of the bird motif between 1850 and 1960. Naturalistic in the 19th century, it then responded to multiple influences, eventually becoming totally abstract. The exhibition begins with land species: the turkey, a skiing duck, the rooster, a pink flamingo by Cartier and some peacocks. Then the central showcase displays birds perched on branches, most of them exotic specimens with opulent plumage. They are followed by birds in flight, including a magnificent hummingbird in diamonds and real feathers. In the last aviary-showcase, dozens of birds appear in mid-flight…

One of the highlights of the exhibition is the unique collection of peacocks by Gustave Baugrand, Napoleon III’s official jeweler. These astoundingly realistic birds are ideal for brooches because of their wide, exuberant spread tails. Gustave Baugrand produced them in splendid color ranges with rubies, sapphires, emeralds and so on. He also made versions in white jewelry using platinum and diamonds. One of his peacock brooches also acts as a watch, with the case concealed by the body.

All the brooches by Sterlé date from the late 1950s to the early 1960s. “The bird of Paradise is his favorite creature, but we don’t know if he was inspired by ancient documents like this 17th century Provençal style manuscript,” says Joëlle Garcia. His birds of Paradise consist of composite elements designed to enhance their main feature: their sumptuous plumage. Reality is not an issue for him!  He surrounds the body of gems and pearls with wings of sophisticated forms set with multicolored stones. He may even make the body virtually disappear by simplifying it as much as possible, reducing it to a single line. All that remains then is the spread wings.

Beyond the motif itself, the constant concern was to reproduce lightness and movement… In the 19th century, the wings of certain birds actually vibrated, as they were set on tremblers, i.e. micro-springs. In 1957, Pierre Sterlé patented a new technique called “cheveux d’ange” (angel hair), where the bird’s tail was made up of different-sized tiny gold chains. This became his trademark. The technique was inspired by a piece of Queen Cleopatra’s jewelry, which he admired on a visit to Cairo Museum.

Halfway between heaven and earth, the circuit unfolds in half-shadow to the sound of birdsong from the sound library of the Musée National d’Histoire Naturelle. An enchanting digression.

Fauna jewelry in the Christie’s sale in Paris 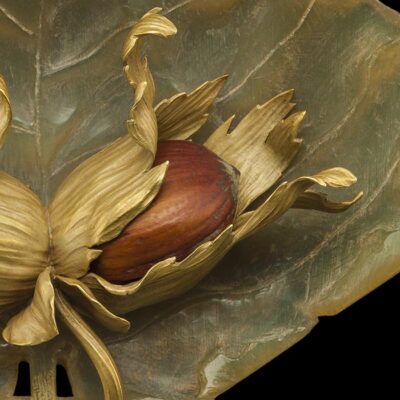