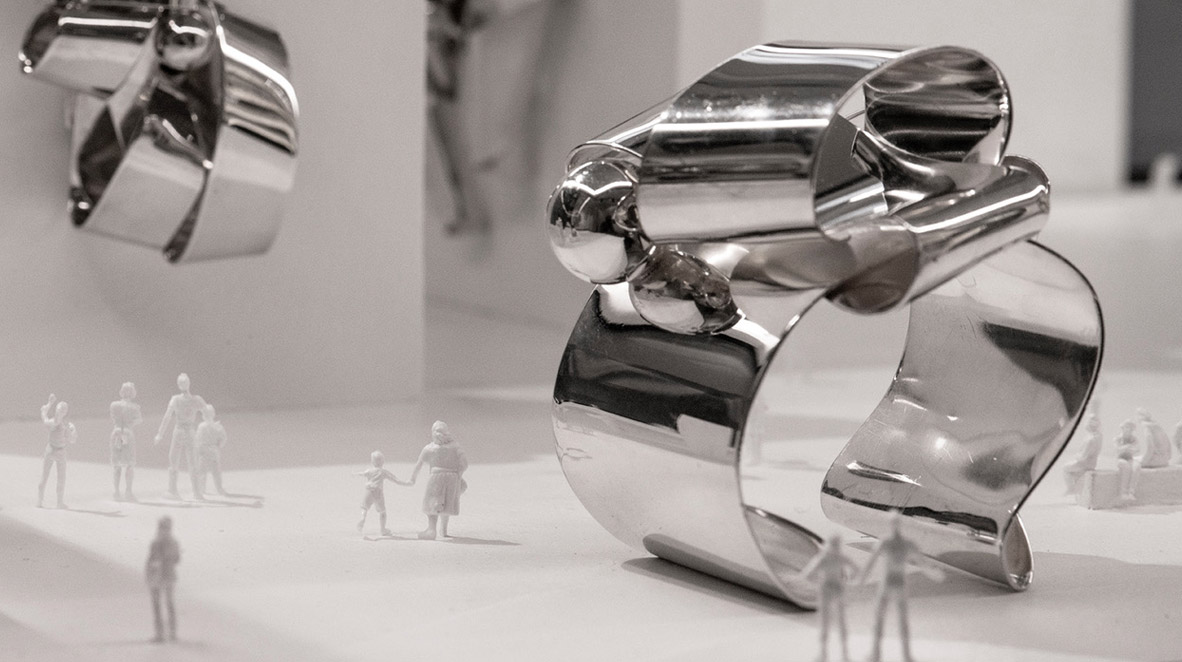 The miniMASTERPIECE gallery, a specialist in artists’ jewelry, presents the exhibition “Forms and Materials” dedicated to Greek sculptor Sophia Vari.

Sophia Vari’s jewelry, with its miniature versions of her works, is composed of a curvaceous tangle of monumental, abstract and sensual forms. An ebony breastplate, spiral rings and, gold bracelets composed of coils and tubes… Epoxy, an extremely light resin, has also recently made an appearance in the work of the octogenarian artist who spends her time between Monaco, Athens and Italy. “Essentially, epoxy allowed me to solve the question of the weight of marble because a work weighing several tons is extremely difficult to move,” she explains. The radical quality of the color red means I can make forms and volumes more legible.”

How her jewelry was born

Sophia Vari has never been particularly fascinated by jewelry, nor even by precious stones. She began creating her works at the end of the 1980s out of frustration, when she was traveling to the four corners of the world with her husband, the sculptor Fernando Bottero. Missing her workshop terribly, she took Plastiline with her and sculpted it into figures about fifteen centimeters long. Seeing about fifty of them lined up on her shelf, she realized that she could transform them into portable sculptures. “I’ve never deviated from this process, I never start by drawing a jewel,” she says. The first is a brooch that she “likes to wear on a collar close to the hair, even though today’s more fluid fabrics in clothing don’t support its weight well.”

The universality of her work

It’s difficult to pigeon-hole Sophia Vari’s jewels, which of course carry within them the prestigious heritage of ancient statuary. “It would take 10 lives to understand the Caryatids, which still make me feel like a student. “ Their names are inspired by Greek mythology. The red epoxy necklace Pieros evokes the king of Emanthia, the father of nine daughters bearing the names of the nine muses. The ebony necklace refers to Hyperion, one of the Titans assimilated to the Sun. But Sophia Vari refuses to cite the influences that have nourished her style, she barely touches on her great esthetic milestones (Paris, the Aztec culture in Mexico, the meeting with Henry Moore). “There are those that inject such enthusiasm into you that you have to rush to your studio to create.” Sophia Vari is above all a universal artist.

Greece, 10 jewels from Antiquity to the present day