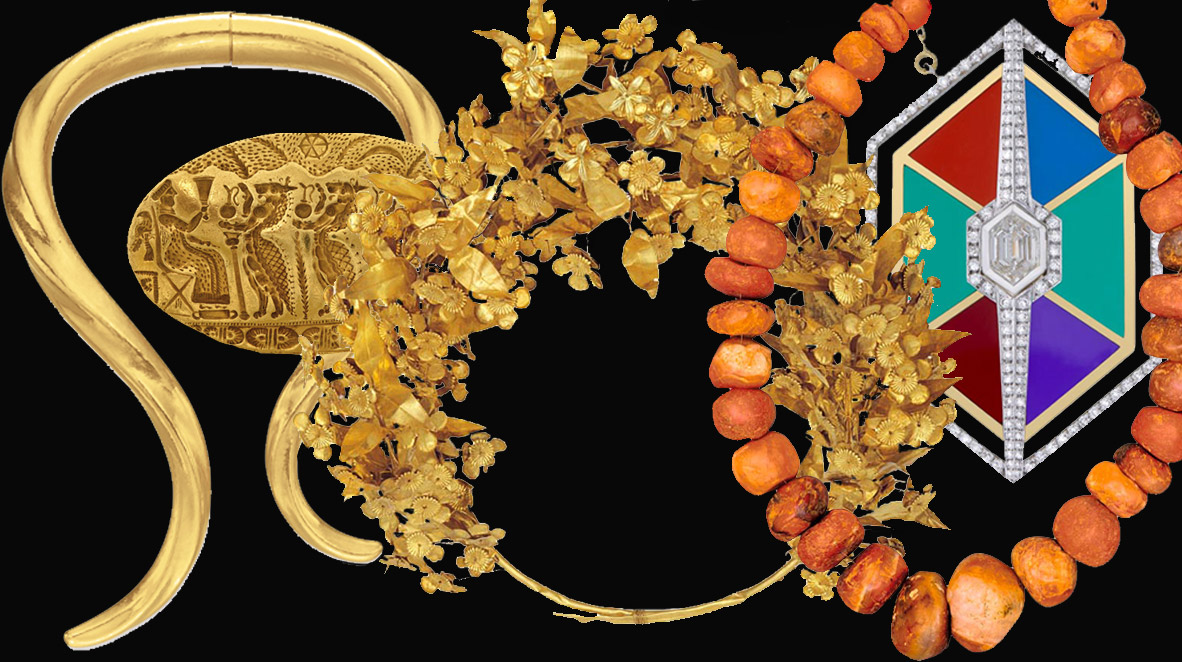 When it comes to jewelry, Greece has delivered up treasures of great beauty. A look at 10 pieces which illustrate changing styles down the ages, from the Mycenaean period to today.

This intaglio, which probably belonged to a priest, is one of the first extraordinary pieces of jewelry produced by Greek goldsmiths. This was the period described by Homer in the Iliad. Its size (the largest known of that time) and great precision mean we can appreciate the depiction of a libation, offering wine or olive oil to a goddess. Other rings of this type, found in royal tombs, show engravings of rural or hunting scenes such as that of Pylos.

This necklace was made at the end of the ‘dark centuries’ between 1200 and 700 BC. Its great simplicity, however, gives it a wild modernity.

Earrings are emblematic of the Hellenic period. Made of highly gilded gold, they illustrate the richness of the combinations of techniques and forms. Women also wear models depicting filigree amphorae, crescent moons decorated with granulation, Heracles’ knots or Eros illuminated with colored stones. The latter came after the oriental conquests of Alexander the Great.

This golden crown probably belonged to Queen Meda and was discovered in the antechamber of the royal tomb of King Philip II, associated with the Golden Age of Greece. With motifs of flowers or leaves, crowns were reserved for representations of deities as well as kings and elites during religious festivals, processions or banquets.

This graceful bun cover, one of the few to have survived, is a testimony to the incredible virtuosity of the goldsmiths of that period. The spectacular part of this head jewel is an embossed gold medallion usually depicting a deity: Aphrodite, Artemis, etc. Placed on the bun, it was held in place by a gold fishnet which was attached to a thin band framing the face. It could also be embellished with chains falling down to the neck.

One must look closely at these incredibly well-preserved cloisonné enamel motifs. Each of the newts carries Eros on his shoulder. The micro fastener is used to attach the bracelet to the sleeve of the garment so that it does not slip under its weight.

These bracelets have survived the turbulent history of Thessaloniki. They were first buried in 904 during the Saracen invasion of this very prosperous city. After the fall of Constantinople, Thessaloniki was the scene of incessant battles… They were reburied around 1660 with dozens of gold coins, probably collected by a rich merchant. Exhumed once and for all in 1956, they are now in the Museum of Byzantine Culture in Thessaloniki.

This wedding necklace from Attica, in eastern Greece, is made of chains holding seven filigree and repoussé gold medallions . The turquoises are set against colored glass. Originally and until the War of Independence (1821-1829), these medallions were coins offered by the family constituting the dowry.

In the midst of the hippy chic wave, Greek jewelry is reborn from its ashes. Lalaounis (one of the two jewelers to take center stage with Zolotas) showcases Minoan, Mycenaean and Hellenic techniques and forms. Many of the jewels are now on display in his museum, located a few steps from the Acropolis.

For contemporary creators, open to other influences, Greek Antiquity is no longer the alpha and omega. Ele Karela is an example with frank colors and graphic lines inspired by Art Déco. The new generation continues, in its own way, to make Greek jewelry shine.

Thanks to the Hellenic Cultural Center (Paris) and Aegean Airlines