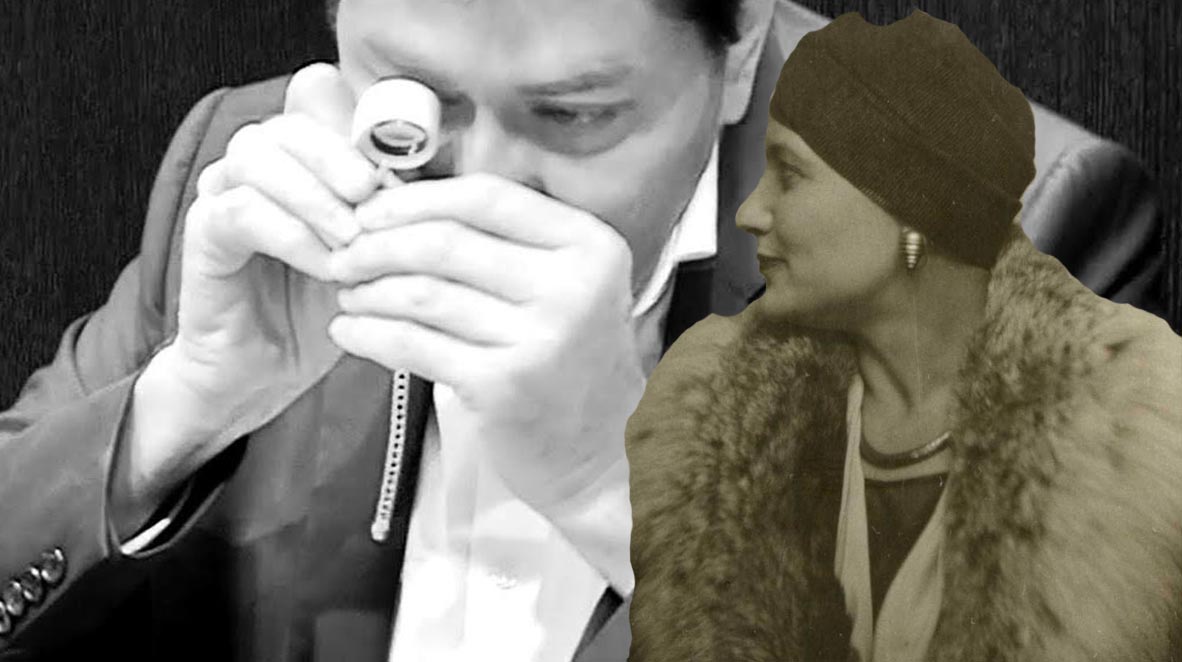 Suzanne Belperron’s jewelry is in great demand at auctions and from antique dealers. An interview with Olivier Baroin, the expert on the designer.

Sandrine Merle. In 2008, you happened to come into possession of the 1937-1974 archives belonging to Suzanne Belperron. This has enabled you to become, today, the leading expert on her work.

Olivier Baroin. I issue certificates of authenticity for Suzanne Belperron jewelry, particularly for auction houses. I also carry out OTC transactions: in other words, I put sellers and buyers in touch. Some are willing to travel the world to acquire a piece, especially if it has never appeared on the market.

S.-M. The number of Belperron jewelry creations in sales and at jewelry antique dealers these days is phenomenal….

O.-B. But don’t imagine that the market is flooded with fakes! The huge amount of communication helps to drive the market: everyone is on the lookout, professionals and potential owners alike. But you know, in the end I only certify one piece out of 30 or 40 that passes through my hands.

S.-M. We know that Suzanne Belperron did not sign her jewelry and often said “my style is my signature”. This makes it more difficult to authenticate them….

O.-B. The doubt is quickly removed if the jewel is listed in an order book or bears the hallmark of its workshop, Groëné & Darde (then Darde & Fils then Darde & Cie). For the rest, there’s no question of giving certificates to counterfeiters… I can tell you that I examine the technical details with a magnifying glass: stamping, welds, adjustments, updates and other fasteners. Take this $880,000 bracelet from Christie’s NY: a clue is the thickness of the metal (6.5 mm), abnormally thin for a piece of jewelry. The raw material doesn’t represent the value of the jewel ! The plates that make it up are not even covered but simply reinforced with arched half-circular wires underneath: this way, the jewel remains thin, light and pleasant to wear despite its volume.

S.-M. Moreover, with Suzanne Belperron, the jewelry is far from perfect, the stones are not of exceptional quality…

O.-B. That’s what makes them so charming! Groëné & Darde did everything by hand but went to the simplest possible solutions in order to save time and achieve greater lightness. Just like Suzanne Belperron who couldn’t care less about the original raw material. The stones were often provided by the clients. On the other hand, the stone sculptures, created by Adrien Louard, are absolutely perfect.

S.-M. Officially, Suzanne Belperron went on designing until 1975. What were her best years?

O.-B. The most beautiful jewelry is from 1925 to 1945, and was entirely handmade. In the 1950s, production reached its peak. Over times, the techniques also evolved: some were made with lost wax castings, which took away of their charm but since this technique couldn’t be applied to all models, this “Cerf-volant” ring produced in 1974 was still for example entirely handmade. My favourites include the emerald butterfly brooch recently sold by Aguttes and the brooch formed by two blond agate leaves and a cascade of pearls. A little later, the bracelet sold at Christie’s (in Vogue 1948) was nevertheless exceptional. There were also the pieces designed at Boivin’s very beginning, such as her personal ‘Yin Yang’ engagement ring (1923) and her personal ring made of a shuttle diamond set in rock crystal.

S.-M. Suzanne Belperron’s legacy is at the heart of quarrels, secrets and controversies, particularly concerning her early days with René Boivin.

O.-B. My goal today is to rehabilitate Suzanne Belperron’s role at René Boivin between 1919 and 1932, when in my opinion she was at the height of her artistic abilities. For me, she made the reputation of this jeweler who was working, at the time under contract to major houses (including Boucheron), and yet we often fail to attribute the pieces to her. It is also said that, angry at Germaine Boivin, she left, taking all her drawings with her… But there is no evidence of that. I think she left in a calm and collected manner. Besides, I would like to point out you that in the late 1960s, one of the Boivin ladies asked Suzanne Belperron to make her a piece of jewelry because she wanted something “modern”.

S.-M. Not everyone agrees with you on this point… Like a biographer, you’re somewhat in love with your subject.

O.-B. I am completely immersed in her universe and his creations. When I feel like I’ve seen everything, I discover a new piece… I still wonder about her intentions: for example, why did she often put big diamonds (of 1 carat or more) in a small stone paving? Suzanne Belperron still continues to surprise and fascinate me.