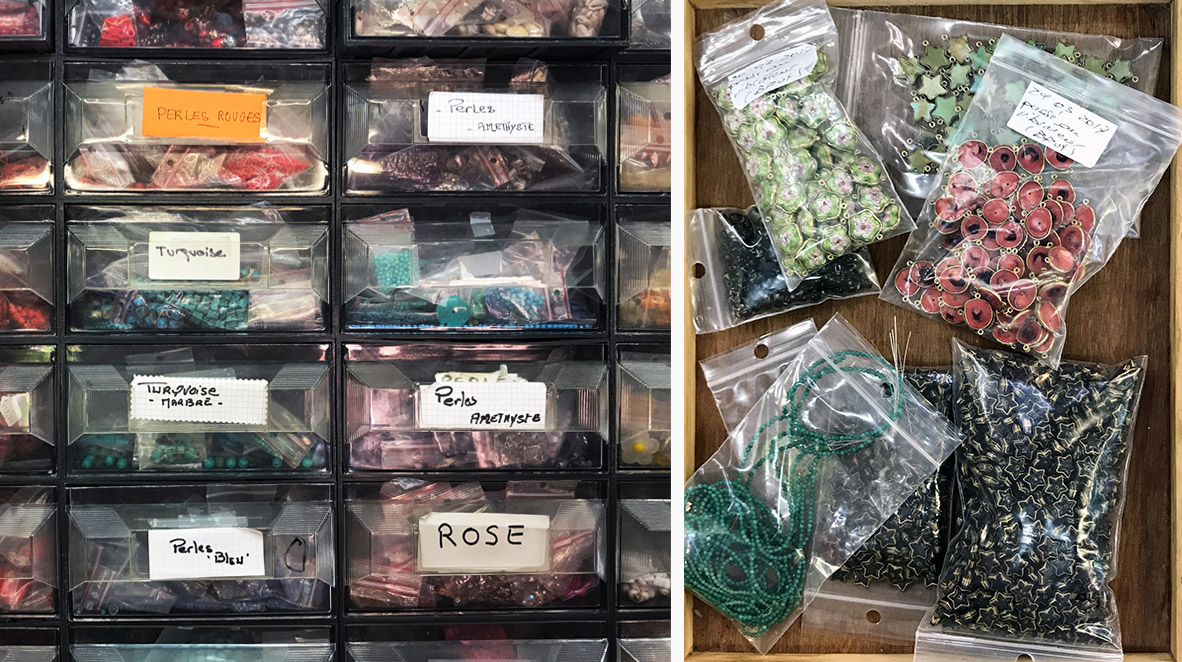 A visit to the Gas workshop, the beating heart of the brand’s “solar chic” style de the hills above Marseille.

After a lunch with a chorus of cicadas, under the pergola of the family home, I set out to visit to the nearby Gas workshop amid a maze of little streets. It was over 50 years ago, that André Gas began making lucky charm bracelets and necklaces inspired by his travels. A laid-back feel still reigns supreme, amid a joyous jumble of boxes, shelves, cupboards overflowing with pearls, sequins, feathers, chains, and watermarks from India, Mexico or Madagascar.

A workshop with a style

This workshop with its view of the Mediterranean is the nerve centre of the brand, the essence of its “solar chic” style. There’s emblematic jewellery on the workbenches: silver-plated metal pillboxes, charm bracelets, coloured micro pearl necklaces and fringe earrings. Metal rushes covered with coloured python, cotton threads and chainlets lie next to gilded brass creoles. Among the bestsellers is a pair of feather earrings. Available in fuchsia, fluorescent green and turquoise, they are notched, rhinestoned and graced with enamel pearls. Sold between 30 and 450 euros, these creations are joyous and noisy, colourful and bold.

In the founder’s image

André Gas is an endangered species unto himself, an uncategorisable, tireless seventy-year-old auto-didact guided by pure energy and intuition. “I started selling jewellery to finance my studies at the Beaux-Arts School. I loved engraving but in May 1968, the role of the artist was seriously called into question. In addition, my shop was requisitioned to print the protest posters.” He plied his wares on the beaches of Saint-Tropez where he opened his first shop in 1971. He made what he sold and sold what he made. “And in the evening, I would alter the models based on my clients’ comments.”

An exception in a non-standardised world

Nothing – or almost nothing – has changed… Only the major jewellery production runs have been relocated abroad. The workshop continues to launch and supervise the other series, often still based on materials brought back by André Ga, from his travels. Far from being mere executors, the craftsmen participate in the creation and are also free to interpret and modify the models, so the colour of the enamel or feathers can easily depend on their moods and whims! This explains the surprises contained in the parcels sent to the Parisian showroom every day, you’re never sure what you’ll find there. “They’re are then distributed to shops all over the world,” explains Olivier Gas.

Olivier Gas joined his father 20 years ago, as did his sister Marie, who was in charge of artistic direction. “The main thing was to preserve this atypical mode of operation despite the 12 shops and 500 points of sale.” And in a rare feature for an international fashion jewellery brand: the assortments offered in Marseille, New York, Tehran or Tokyo are slightly different. They continue to attract aficionados, those who simply pass by the shop every day and those who travel. This strategy has also been extended to the e-shop thanks to the “Unique pieces” and “Fresh out of the workshop” sections, which are often sold out within an hour. At Gas, nothing is 100% standard or predictable. And for once, this isn’t just a made-up story: there’s still a freedom and a hint of madness emanating from the Marseille workshop that is the den of André Gas.