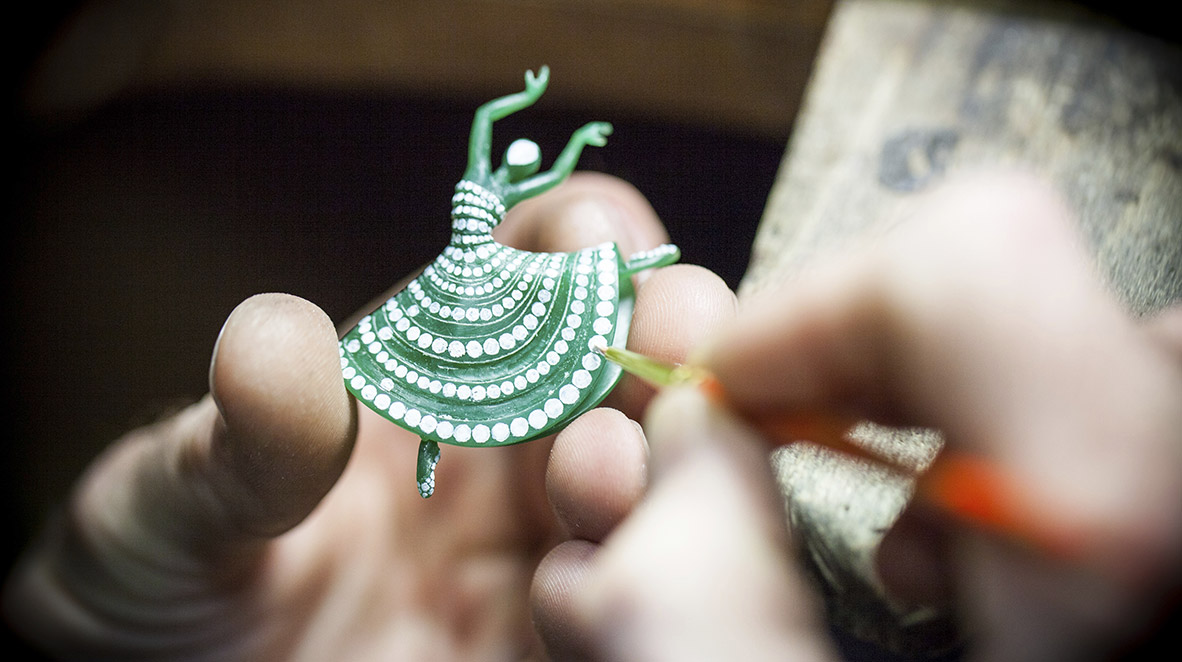 The ballerinas at the heart of the new Van Cleef & Arpels exhibition were inspired in the 1940s by the paintings of Edgard Degas.

One ballerina launches herself into the air while another executes an arabesque. Her arm rises elegantly, her leg is outstretched and her foot is curved. The postures and movements of these 7-8 centimetre dancers, usually mounted on brooches, are captured with infinite grace …

The first ballerina was the brainchild of Louis Arpels, a great ballet lover, in New York. From the very beginning, the face of this graceful figurine was stylised by a pear-shaped diamond. The stage costumes are highly sophisticated, like that of the Spanish dancer: note the emerald lining of her tutu rustling with diamonds. The ballerinas designed for the French market are very understated. One in yellow gold sequins is graced with turquoises, another with diamonds. Gold is also textured, pleated or punctured to represent English embroidery or tulle.

Over the years, dance has become the Maison’s favorite theme. The second highpoint was in 1967 when Claude Arpels (Louis’ nephew) collaborated with the Russian choreographer Balanchine to create Jewels, a ballet in three acts: “Diamonds”, “Emeralds” and “Rubies”. The most recent harks back to 2013: when Van Cleef & Arpels teamed up with Benjamin Millepied and his L.A. Dance Project company for the ballet Gems.

A ballet by Van Cleef & Arpels

The ballerina represents a repertoire of light and graceful forms. Some are inspired by real dancers like Suzanne Farrell or Pavlova. She is seen from the front or from above, as if from a box at the theatre. Her diamond tutu blossoms like a corolla … The tutu is also made of Serti Mystérieux emerald or ruby. The ballerina metamorphoses into half-dancer, half-marine creature with endless diamond tentacles in the “Les Voyages Extraordinaires” collection while in “Le Secret” she is transformed into a swan sparkling with blue sapphires.

“The oldest models are difficult to acquire because few owners are willing to part with them,” explains Catherine Cariou, director of heritage. The record is held by the model depicting the famed 18th–century dancer Maria Camargo, estimated at between $80,000 and $120,000 by Christie’s. In 2009, it was finally sold for over $400,000. In January 2018 in Monaco, the auction house Artcurial will offer a corsage brooch and two ear clips featuring a 1940s flamenco dancer and her two little rats. Estimate 100-120,000 euros. Collectors take note.