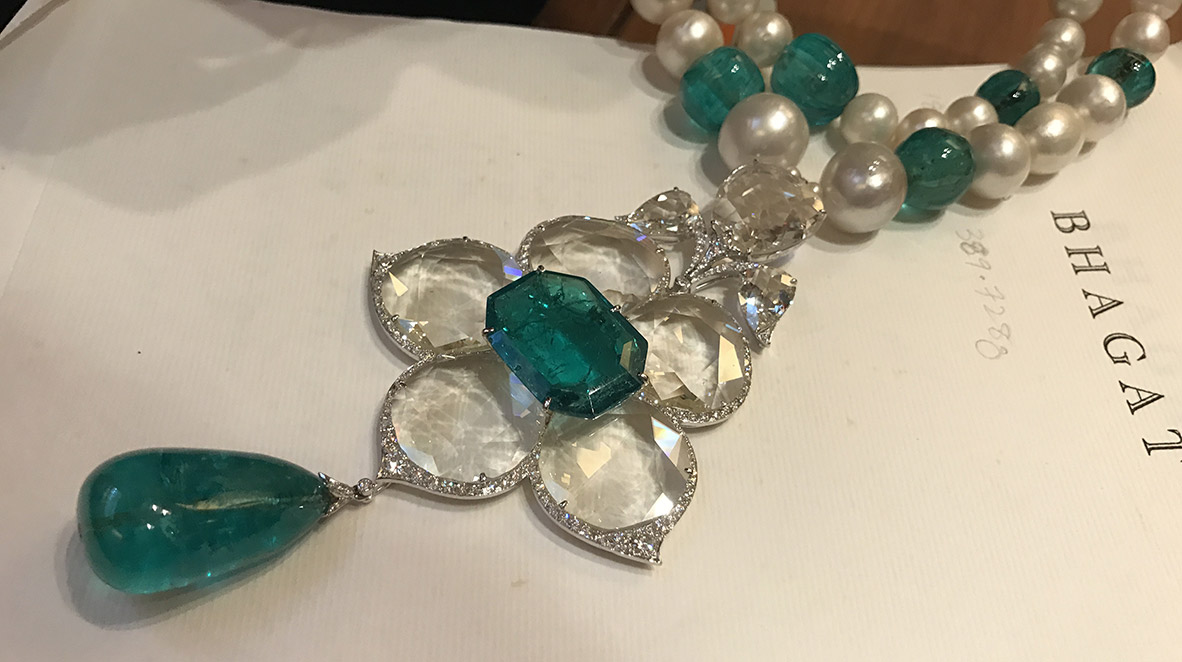 In Bombay, I met with the only contemporary Indian jeweler represented in the exceptional Al Thani collection presented at the Grand Palais.

Viren Bhagat comes from a very old Indian jeweler family. His great-grandfather, who came to settle in Bombay, originally was a village goldsmith in Gujarat. For a long time the family business has been to make traditional jewelry to order and to sell the precious stones in large supply in India. In the early 1990s, Viren Bhagat brought a new creative dimension to this business and went on to become a major contemporary Indian jeweler represented in such large exhibitions as “India: jewels that have conquered the world” held in Moscow in 2014.

The contemporary look of the front windows to the showroom is a stark contrast to the noisy chaos of the street outside. Inside, there’s waxed concrete and red lacquer furniture along with bookshelves filled with books on Indian textiles, architecture and paintings from the Mughal period of the 16th and 17th century. A rich source of traditional inspirations such as lotus flowers, turban ornaments, peacocks or mausoleums that Viren Bhagat hybridizes with the codes of Western elegance stemming from the Belle Époque and Art Deco. “For me, the ultimate reference is the Cartier style of the 1920s and 30s which is characterized by its pure and angular lines,” he explains, whilst sharpening his pencils to a perfect point. Such simple tools to guarantee the extreme precision needed in his drawings.

The jewelry in the Al Thani collection exhibited at the Grand Palais is a testimony to this style Viren Bhagat calls Indian Deco. Traditional yellow gold has given way to platinum. The structures are so light that they disappear to showcase the gemstones that seem to float space. No kundan settings or polychrome explosions though. The ubiquitous flat diamond is matched only with emeralds, sapphires or rubies which often come from such legendary mines as Golconda or from old Indian families. The flat bracelet of Rajasthan is formed by a delicate imbrication of fine pearls and diamonds. The peacock, one of the few figurative motifs in Bhagat’s work, is stylized to the extreme thanks to a pear center-diamond from which pearls are suspended.

Viren Bhagat has chosen to produce only very few pieces, not more than sixty per year and whose prices reach millions of dollars. He makes no publicity and reserves the freedom decline orders from customers who do not correspond to his style … Which makes him worthy of being compared to the American, Joel Arthur Rosenthal (JAR), the only other contemporary jeweler Sheikh Hamad bin Abdullah Al Thani chose to be part of his collection. And as Viren Bhagat ironically puts it: “What if we rather said that JAR is the American Viren Bhagat?”.

Articles related to this topic:

India and the 70s

A travel around the Al Thani collection