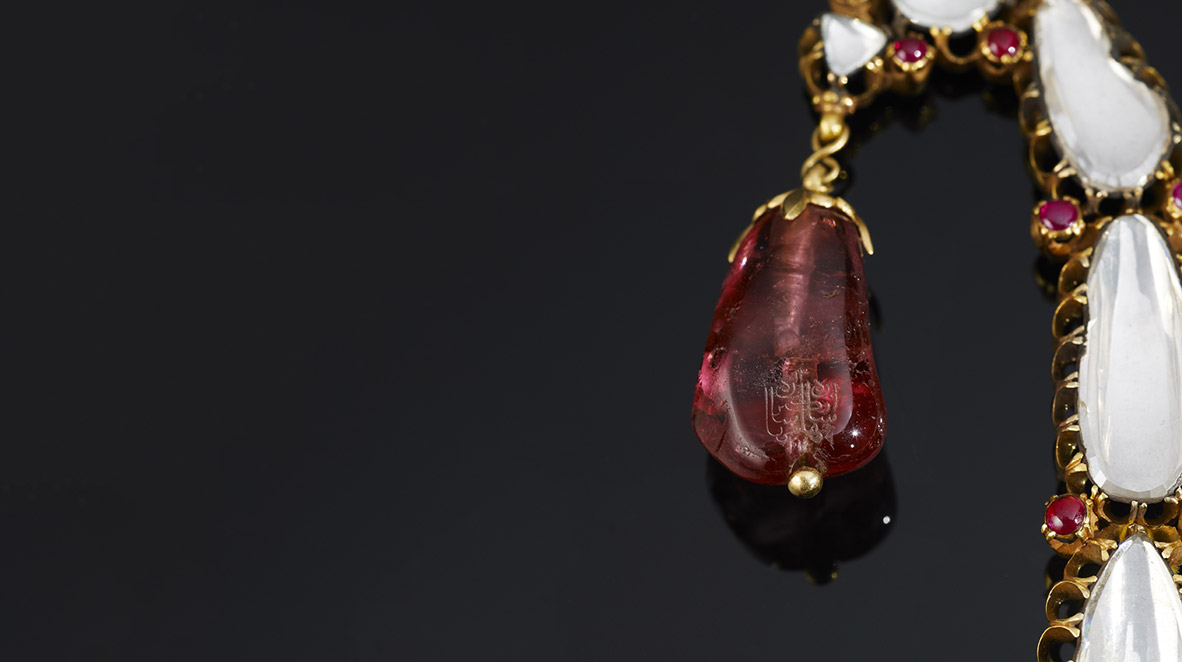 From March 29th to June 5th 2017, the Grand Palais will present “From the Great Mughals to the Maharajahs. Jewels from the Al Thani collection”, an exhibition that traces more than five centuries of Indian jewelry history and that also shows the influences both India and the West had on each other’s jewelry creations.

This exhibition features 278 pieces ranging from jewelry to inkwells, daggers and sprinklers, mostly belonging to wealthy Indian princes. Among the jewels are such wonders as the engraved emerald of the Mughal Emperor Shâh Jahân, the turban-aigrette of the Nawanagar Maharaja made up of seventeen diamonds for a weight of more than 150 carats and the peacock brooch made by the French jeweler Mellerio. The turban ornament with its spectacular cognac diamond and the necklace of the maharaja Patiala with its innumerable rows of diamonds are lent by Cartier, to whom they belong today. All these pieces testify to sumptuousness unique in the history of jewelry and the ancestral mixing of India and Europe creative cultures.

A total of 266 pieces in the exhibition come from eight years of collecting by Sheikh Hamad Ben Abdullah Al Thani, a member of the Qatari family which owns the Lambert Hotel in Paris. It all began as a result of his visit to an exhibition at the Victoria and Albert Museum in 2009 where he fell in love with the jewels of Mughal emperors of Muslim culture, who ruled India from the sixteenth century to the mid-nineteenth century. To gather more than 300 pieces in such a short time, the Sheikh called upon the services of Amin Jaffer, an Indian born in Rwanda who was a curator at the Victoria and Albert Museum in London for thirteen years and who went on to head Christie’s Asian Art Department for ten years. “We met at the opening of the Doha Museum. Then for three years we exchanged and visited museums together,” explains Amin Jaffer, the conservator of the collection today.

India, the cradle of flamboyant jeweler

India is intimately linked to jewelry. The country has been known since ancient times for its incredible reserves of rubies, sapphires, amethysts, spinels and diamonds extracted from the mines of Golconda which are some of the most beautiful ever seen. Since the fifteenth century, India has also spawned the most glorious sovereigns, dazzling dynasties of Mughal emperors, flamboyant maharajas and nizams. They had created and sported the most beautiful jewels ever made of which few have survived political turbulence and whose only trace remains in Indian miniatures. Hence the inestimable character of this collection.

On one side, the European influence

During ceremonies the Indian princes observed English aristocrats like Lady Curzon, corseted in their dresses and adorned with diamond creations signed Boucheron and Cartier. At the same time they increasingly visited Europe. So much so that at the end of the nineteenth century the signs of a mixing of jewelry styles became apparent. On their royal finery platinum replaced the sacred gold in use, the regular facets of the brilliant cut prevailed over the simple polished stones that preserved the weight of the stone. The kundan, a technique of setting inherited from the Mughals, gave way to claw settings. On their spectacular jewelry pieces, en tremblant elements and knots, both typical of the Victorian era, were both to be found.

On the other side, the influence of the maharajas

Maharajas’ orders largely contributed to the international reputation of French jewelers and also served to attract customers from all over the world. They also enormously stimulated their creativity. These influences were reflected in the colors, designs and techniques of which Cartier’s “Tutti Frutti” was the most emblematic example when in 1925, the jeweler created a sensation with its assemblages of stones in primary colors. Sapphires, emeralds and rubies fashioned in the Mughal tradition, that is to say, in the form of smooth balls, engraved or cut into leaves and flowers, were set in an interlacing of branches which at first glance recalls the green, red, blue and white polychromes of Indian enamels.

The exhibition ends with contemporary jewelry by the Indian jeweler, Viren Bhagat, and the American, Joel Arthur Rosenthal (JAR), acquired by Sheikh Hamad Ben Abdullah Al Thani. The twelve pieces by Viren Bhagat display no profusion of color, enamel or traditional kundan gold settings. They are hybrids of Mughal architectural elements taken from ancient manuscripts, pompons and Paisley patterns with the clean, geometric lines of Parisian Art Deco. The exhibition provides a rare occasion to admire pieces by JAR. With the exacting sense of detail that characterizes the designer’s work, they take the head of an elephant carved in cacholong, the domes of mosques and mashrabiya designs.

The favored means of international communication and exchanges by Internet haven’t succeeded in dulling the fantasies of India and the mixing of influences and styles.

The Al Thani sale at Christie’s, the sale of the century?