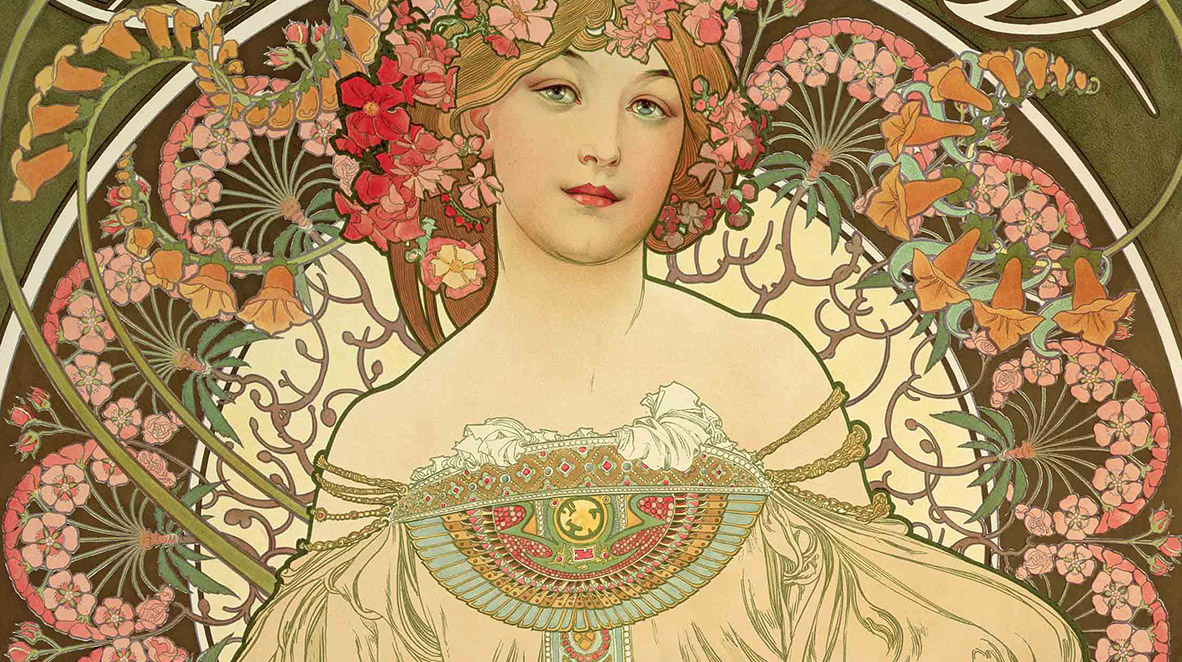 Alfons Maria Mucha, best known for his advertising posters and decorative designs, also played an essential role in jewelry, notably thanks to his collaboration with the jeweler Georges Fouquet.

As a successful illustrator in the early 1890s, Mucha began collaborating with the actress Sarah Bernhardt. For the poster of Gismonda he represents her in her stage costume decorated with curving designs and floral and oriental elements. For Lorenzaccio, she wears around her neck a large necklace whose designs echo the brocade of the costume, while on the poster for Mélissinde Mucha portrays her wearing a diadem with precious stones and pearls surmounted by a star. Her bodice features circular jewelry designs with pearls and gems in pastel shades.

Mucha created advertising posters and decorative designs that included Zodiac and Byzantine Heads. The intricate hair ornaments the young women wear are abound with details and testify to Mucha’s rich imagination in the field of jewelry. For the art magazine La Plume, Mucha once again represented these ornaments mainly composed of large discs set with colored stones and fitted with chains. These precious ornaments contributed to the creation of his allegorical figures, those timeless and poetic personifications of such abstract notions as Music or Painting from “The Arts” series, with vegetal and mineral elements like Iris or Primrose from the “Flowers” series, and Ruby and Amethyst from the “Precious Gemstones” series.

One of the major pieces by Mucha was commissioned by Georges Fouquet for Sarah Bernhardt in 1898. It is a serpentine bracelet with a fine chain that connects it to a ring. It is the interpretation of the one Sarah Bernhardt wears while striking a pose as the tragic heroine for the poster for Médée. Mucha’s collaboration with Fouquet intensified around the time of the Universal Exhibition of 1900, with creations made with such materials as enamel, gold, mother-of-pearl, semi-precious stones and chains. They take up the elements of his aesthetic vocabulary, in particular the arabesques and the female figures whose long interwoven hair echoes the fabrics and the vegetal and oriental motifs, to form pendants, bodice pins, brooches and rings. A 1908 reinterpretation is found on his poster for the play Kassa where the American actress Leslie Carter wears a bodice pin whose medallion once again takes the enamel feminine figures made with Fouquet.

In 1901, Mucha opened a new jewelry boutique at 6, rue Royale, which Henri Vever described as a “sumptuous installation of unprecedented and refined elegance” (see La Bijouterie française au XIXe siècle). The boutique, itself appearing much like a real work of art, was a manifesto to his fine aesthetics. On its facade ten medallions portraying female figures framed a bronze bas-relief depicting a young woman holding long and imposing pendants in her hands. In 1923, the decorative elements designed by Mucha were removed and Fouquet gave them to the Carnavalet Museum, where a reconstitution of the boutique can be seen today.

In the seventy-two designs published in 1902 in the Documents décoratifs, Mucha represented studies of feminine figures and plants, as well as drawings of decorative objects which appear as progressions of previous studies. Among these objects, which include furniture, dishes and wallpaper, are many jewels, some of which were produced with Fouquet and thus obtain a life of there own.