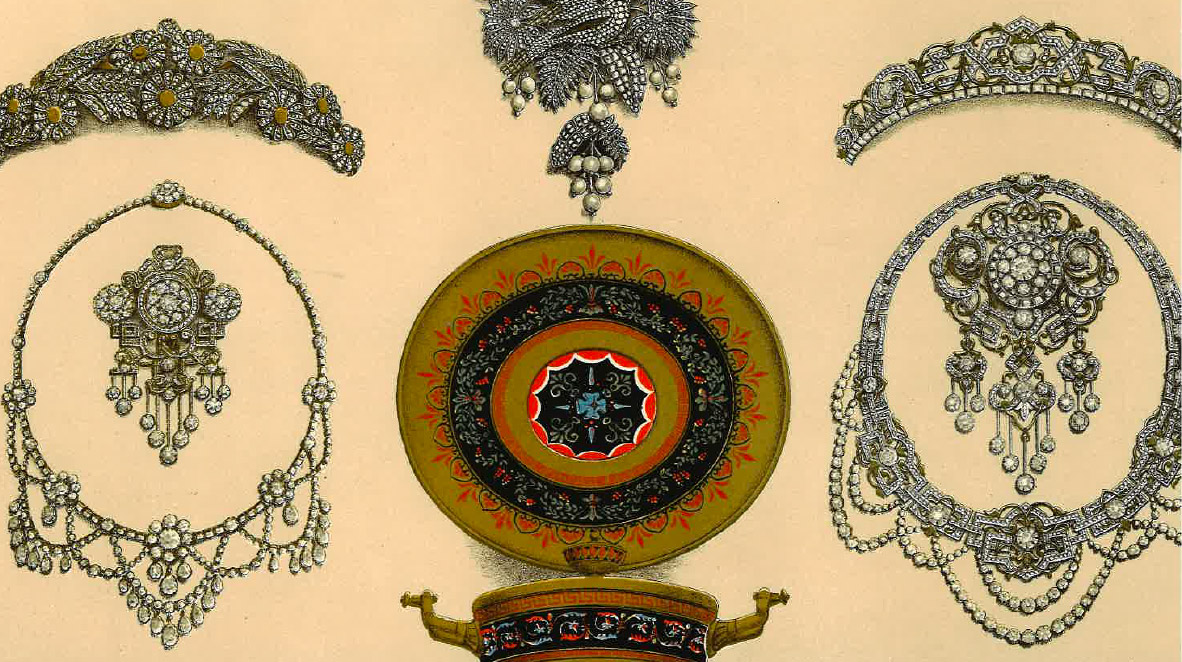 The recent sale of 12 notebooks of gouaches and more than 3,000 drawings by Rouvenat passed almost unnoticed. One of the flagships of French jewelry appears to have sunk into oblivion. And yet what a talent he was!

Léon Rouvenat was at the height of his fame in the years 1850-1870, in the middle of the Second Empire. His competitors included Boucheron, Fontenay, Mellerio, Froment-Meurice and Alphonse Fouquet. Cartier was not yet on the scene. He caused a sensation at the World Expos, where he picked up top prizes, medals and prestigious clients. In 1867, Empress Eugenie bought a magnificent lilac brooch with diamonds. The press was ecstatic: “The reputation of this well-known company speaks for itself”, “For taste, simplicity, and perfect harmony, look no further.  […]”. And yet this did not prevent the company from fading away just before the First World War.

A genius of naturalism

The elegant women in crinoline of the Second Empire were fond of jewelry in the Etruscan style, hyper-naturalist or Gothic-tinged. Léon Rouvenat created tiaras with rosehips, necklaces with pointed tassels, transformable medallions, brooches decorated with chains, arabesques, palmettes organized around cabochons of precious stones. His virtuosity in metalwork (chasing, stamping, etc.) reminds us that he was the apprentice (then an associate until 1849) of the goldsmith Christofle. He invented the “cachemirienne”, a brooch whose stem he replaced with two claws to hold the cashmere shawl. His hummingbirds are gossamer light. The lilac brooch quivered at the slightest breath thanks to its diamond stems mounted on aspens. It is said to have been inspired by a real spray of white lilac, picked fresh every morning, so that his workers could make made an exact copy.

One of the world’s first jewelry manufacturers

Léon Rouvenat was part of the general movement towards industrialization in France, the first phase of the great companies we know today. In 1851 (the year of Louis Napoleon Bonaparte’s coup d’état), he opened a huge workshop with a glass ceiling where gold beaters, lapidaries, goldsmiths, and polishers were brought together. A groundbreaking move! Until then, they had all worked separately, crammed into rooms of varying sanitary standards. A sort of Aristide Boucicaut of the jewelry industry, he initiated numerous social measures, such as retirement funds.

Through his association with Christofle, Rouvenat inherited a South American clientele: he therefore created swords and finery for generals and presidents of Latin American countries. His first hummingbird went to the King of Prussia, while thirty-eight others were commissioned by the Viceroy of Egypt. Meanwhile, a belt, a necklace, an egret and earrings were the pride and joy of the Shah of Persia. Rouvenat very quickly understood the potential of the tourism boom, targeting “those wealthy foreigners who visit France and who rarely return without having bought some of its jewelry … “. They flocked to France in increasing numbers from all over the world on trains, ferries and transatlantic liners. Meanwhile, the jeweler himself wasted no time in crossing the Channel to participate in the Universal Exhibition in London in 1851, at the Crystal Palace.

Léon Rouvenat had no worthy successor; no one to uphold his vision and his talent throughout the twentieth century. Few great companies from that era have survived except Boucheron, Chaumet and Mellerio. And today – surprising though it may seem – there are very few Rouvenat pieces: a dozen in auctions and one remaining hummingbird. Nobody knows where the lilac brooch is  – or if there is still a single cachemirienne in existence. As for the museum, the MET is the only one to possess a piece, a brooch that’s merely “attributed to” the master. It’s a real mystery… But the company that also manufactured for others did not necessarily hallmark all its jewelry and there some unwitting owners may still be in possession. The perfect investigation for a Sherlock Holmes of the jewelry world!