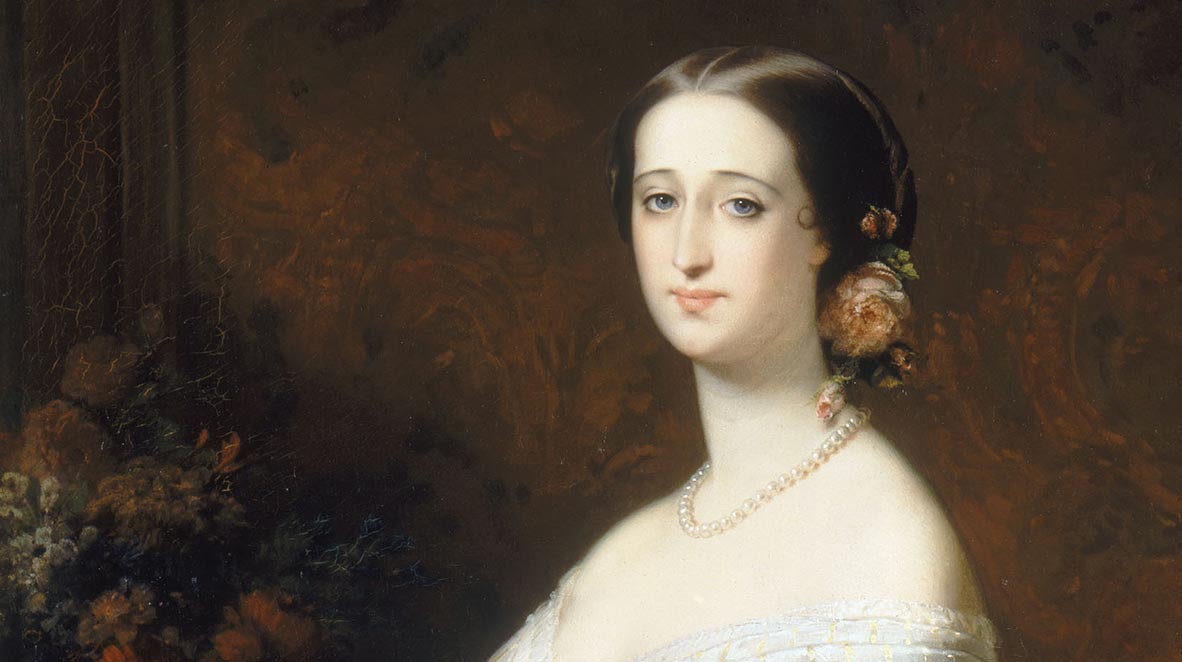 What were the tastes of this Empress who was one of the largest jewelry collectors of all time?

At receptions and balls, the Empress’s duty was to promote the expertise of French creation. On her breathtaking gowns by designer Charles Worth, she wore pieces by the jewelers Evrard Bapst and Gabriel Lemonnier, today lost. Qualifying them as the “harness of representation”, she quickly got rid of her jewels on leaving the ball, dropping them into the hands of her entourage. Five of these priceless pieces survived the sale of the Crown Jewels in 1887 and are now exhibited at the Louvre.

These jewelry pieces are less ostentatious and more varied in style. Here we find a peacock feather brooch, dragonflies and butterflies, pieces in antique and naturalist-styles, chandelier earrings, a four-leaf clover brooch in emeralds by Fossin the Emperor gave her before their wedding, and a heart in rubies among others. Order books show she visited her favorite jeweler, Mellerio, almost each day.

A young woman of fashion

The Empress added her personal touch by having her jewelry pieces dismantled and made into new ones. Her large belt bow she moved to the front of her bodice and the fan the Emperor gave her in ivory and Alençon lace studded with diamonds was transformed into a series of star pins worn in the hair in an inspiration coming from Elisabeth of Austria.

The cult for Marie Antoinette

She identified with her … She posed with powdered hair and a yellow taffeta dress with blue ribbons and black bows, and had copies made of her stomachers like this brooch depicting gooseberry leaves, sold by Christie’s in 2014. The ribbons, flowers and foliage and especially the bows were among her favorite motifs.

Here she rivaled her cousin Mathilde. Her collection included countless necklaces, including one with three rows she received from the Emperor just before their marriage. There were also pairs such as these grey drops, recently sold by the American jeweler Siegelson. She inherited the “Regente”, a legendary pearl acquired by Napoleon for Marie Louise which the Russian jeweler Faberge acquired in 1887.

A passion for emeralds

Eugenie had a magnificent collection of Colombian emeralds. After successive inheritances and sales, seven of them are to be found on a necklace belonging to Shah of Iran’s wife. Christie’s in Geneva sold two others, respectively of 17.97 carats and 15.99 carats, in 2011.

Jewelry and a sense of charity

Eugenie’s passion for jewelry did not stop her from refusing a sumptuous necklace the city of Paris wished to give her for her marriage, she asked that the amount be used for the construction of an orphanage.

Thank you to Émilie Bérard, head of heritage at Mellerio.