Home > Style > School Jewelry Arts lectures > “The Jewels of the Renaissance”, an Evening Conversation at The School of Jewelry Arts 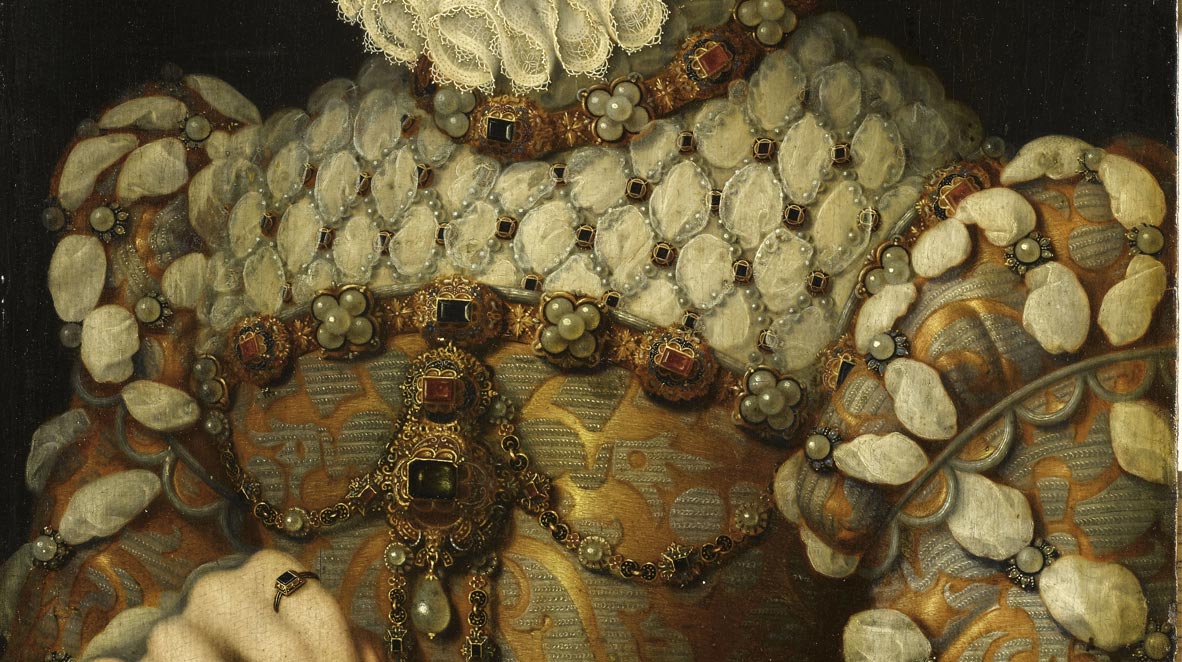 The Renaissance is associated with painting, literature and architecture. In its recent Evening Conversation, The School of Jewelry Arts, for its part, shone a spotlight on goldsmiths and jewelry

The fall of Constantinople under Ottoman rule in 1453 shifts of the center of world trade from Venice to Lisbon in the 16th century. In order to seek out new trade routes, the great European powers launch vast maritime expeditions both towards the West (by Hernan Cortes or Christopher Columbus) and the East (by Vasco de Gama). India, where the only known diamond deposits were to be found (until the 18th century), was a particularly strategic destination.

An influx of new materials

Thanks to these new maritime routes, goldsmiths saw the arrival of caravels laden with tons of rubies and sapphires from Ceylon, and lapis lazuli, turquoise and silver from Mexico. Shipments of gold and especially emeralds from Chivor and Muzo were unloaded from Colombia. These were fashionable stones, combined with pearls that flowed from the Persian Gulf. They entered the curiosity cabinets of the greatest collectors, and were mounted in endless rows and embroidered on dresses. As a symbol of virginity, they were associated young girls and with Queen Elizabeth I of England, nicknamed the Virgin Queen. These Baroque pearls, with their irregular forms, were shaped like the shell of a caravel or the body of a salamander – a very much appreciated animal of the time. Even Leonardo da Vinci was interested in this subject: in one of his sketchbooks, we can see a mask designed to make pearl fishing easier!

Who were the great goldsmiths?

“The goldsmith’s profession was profoundly affected by printing,” explains Michèle Bimbenet-Privat, curator general in the department of objets d’art at the Louvre Museum. Thanks to engraving, drawings spread more quickly and easily throughout Europe, creating an international style, for the first time.”  No goldsmith ever became as famous as Leonardo da Vinci, the archetypal Renaissance man. However, a few managed to distinguish themselves in workshops governed by a very strong tradition, such as Benvenuto Cellini, Wenzel Jamnitzer and Etienne Delaune. The latter published a very realistic engraving of a Nuremberg workshop, giving us an idea of its organization: on the left, we see the apprentice who enters the trade at the age of 11, before becoming a journeyman-worker 8 years later, like those sitting at the table. The oldest, sporting a beard, is probably the master.

New jewelry made an appearance, as can be seen in the portrait of Elisabeth of Austria, wife of Charles IX. It was fashionable to wear jewelry sets, i.e. with similar combinations of stones or technics or motif. Other typical Renaissance pieces included the touret (a headdress formed by a row of pearls running from one ear to the other) and aiguillettes: ornaments used to fasten the sleeves of highly complicated dresses. Meanwhile, the jazeran covering the neckline consisted of a network of stones evoking a mailcoat: the name, in fact, came from Algiers, where chainmail was made. Diamonds, very dark, were not yet faceted and therefore cannot reflect the light. A jewelry item was usually tapered off with a pearl. Thus heavily bedecked, Elisabeth of Austria resembled an icon… and must have felt very constrained by the weight of the whole outfit.

The pendant could take the shape of a cupid, a caravel or, more amusingly, a toothpick, as in the 1525 portrait of the prominent banker Anton Fugger. “In portraying himself like this, he implied that his business was healthy,” says Michèle Bimbenet-Privat. Pendants were sometimes worn on the shoulder or back. The hands were laden with rings. These might be sundials, with a bezel that could be lifted up, mourning rings with skulls, seals, and such like. On the belt, the arsenal of jewelry included animal paws, bottles of holy water, bells, keys, purses and pomanders. The pomander opened like an orange, with each quarter containing scented wax, ambergris, musk and such like. People used them to perfume themselves and ward off disease. Men also wore them, like burgomasters who wanted to imply their ability to protect citizens.

Since jewelry has always reflected the tastes of the elite, the craze for Antiquity was hardly surprising. Men and women loved glyptics: the art of carving stones in relief for cameos and negative relief for intaglios. The latter often featured the patron’s coat of arms so they could be used as seals. Botticelli painted the lovely Simonetta Vespucci wearing an intaglio around her neck: an engraved cornelian of “Apollo and Marsyas” belonging to Lorenzo the Magnificent’s collection. They were frequently “improved” by adding elements or replacing a missing part. On the reverse side of enamel jewelry, goldsmiths would feature grotesques, with a highly poetic mix of figures, architectural elements and garlands. These were inspired by the ones discovered by Roman artists on vaults and walls in the ruins of Nero’s great palace, buried in rubble.

The high and mighty have always used jewelry to assert their power. This was particularly true in the Renaissance, as there was great rivalry between European princes. “As well as his rich and lavish clothing, Henry VIII wore a great deal of jewelry,” says Cécile Lugand, a teacher and researcher at The School of Jewelry Arts. The orders of chivalry including the Golden Fleece recognizable from the pendant in the shape of a Ram’s body were signs of belonging and allegiance. Elizabeth I, the only female monarch, was not to be outdone: in her portraits, she sported a wealth of stones and pearls in her hair and clothing. Meanwhile, in April 1530, François I created the collection of the Crown Jewels of France, starting with eight pieces mostly contributed by his wife, including the Cote de Bretagne spinel – the only piece that has come down to us. Enriched by subsequent monarchs, the Crown Jewels of France had a fascinating history, which will be explored by The School of Jewelry Arts Joailliers in its first masterclass on 2 and 3 March.

The Renaissance ended in 1610, with the death of Henri IV. During the 200 years since then, the groundwork for a new jewelry industry has been laid. In the 17th century, the art of enhancing the value of the stones improved in part thanks to new techniques related to cutting, revealing the brilliance of the stones and making it possible to lighten the mounts. This marked the birth of jewelry.

“Pearl merchants”, the saga of a jewelry trade