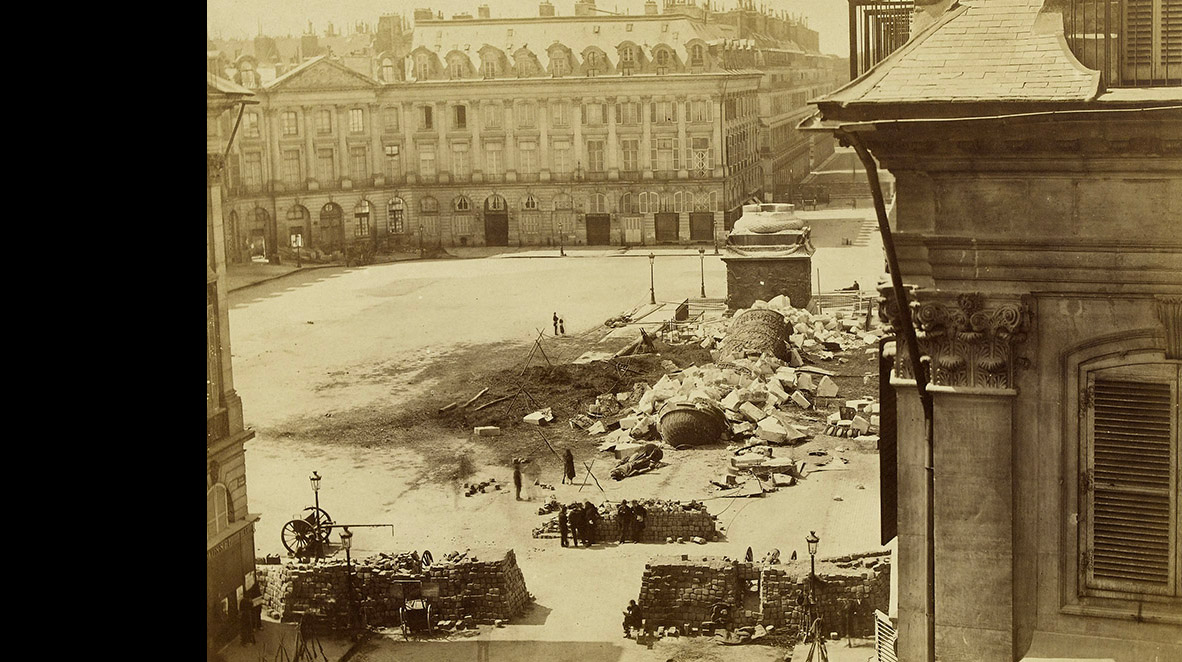 The Vendôme column, a monument to Napoleon’s glory, was demolished during the uprising of the Paris Commune exactly 150 years ago.

May 16, 1871. The atmosphere can easily be imagined from drawings or the invaluable pictures taken by Bruno Braquehais, one of the first ever photojournalists. The workers, overseen by engineer Jules Iribe, started at 2 pm. Twenty thousand people in the square and at the windows of Rue de la Paix and Rue de Castiglione chanted songs and hymns as they watched the demolition of the Vendôme column. At around 5:15 pm, it duly crashed onto the manure-covered ground, to the cheers of the crowd. The statue of Napoleon as Caesar, holding the scepter and the hand of justice, was now lying on its back, its head split on the side facing Rue de la Paix. The red flag was raised on the base of the column, and onlookers rushed to seize trophies.

Jewelers in the square?

At that time, no jewelers were established in Place Vendôme, as they were all still at Palais-Royal – except Gabriel Lemonnier, official jeweler to Napoleon III, who had designed Empress Eugenie’s crown and pearl tiara. His store was at no. 25, on the corner of Rue Capucine, where Bulgari and the Hôtel Mansart stand today. But when the column collapsed, he had already fled with his family, terrified by the violent clashes raging beneath his window. Nor did he ever return: his business did not survive the emperor’s fall. And only 20 years later, Boucheron moved to Place Vendôme.

What triggered the demolition?

This act was considered the most dramatic and spectacular of the Paris Commune, a sudden insurrection against the government of the Third Republic proclaimed at the height of the Franco-Prussian war. For the Communards, this “totem” was the ultimate symbol of imperialism and power. Napoleon I had built it using the bronze cannons taken from the Austrian and Russian armies at the Battle of Austerlitz. This bronze was transported to the Hotel de la Monnaie to be melted down after the column fell.

The painter Gustave Courbet was associated with the Commune, in which he played an active part. This was why the Republic held him responsible for the destruction of the Vendôme column. But his role was much debated: the artist, close to Proudhonian, socialist and anarchist circles, does not seem to have taken part in the demolition. He had, however, previously launched a petition for the government of the National Defense to “bring down” this imperial symbol. Sentenced to pay for its reconstruction, he went into exile in Switzerland, where he died just before paying the first installment.

Six days after the Vendôme column was toppled, the Assemblée de Versailles decided to rebuild it. Barely two years later, in 1873, de MacMahon, Marshal of France, had an identical copy reconstructed. It still stands today in the famous square, now the epicenter of French jewelry.

Going for gold around the Place Vendôme