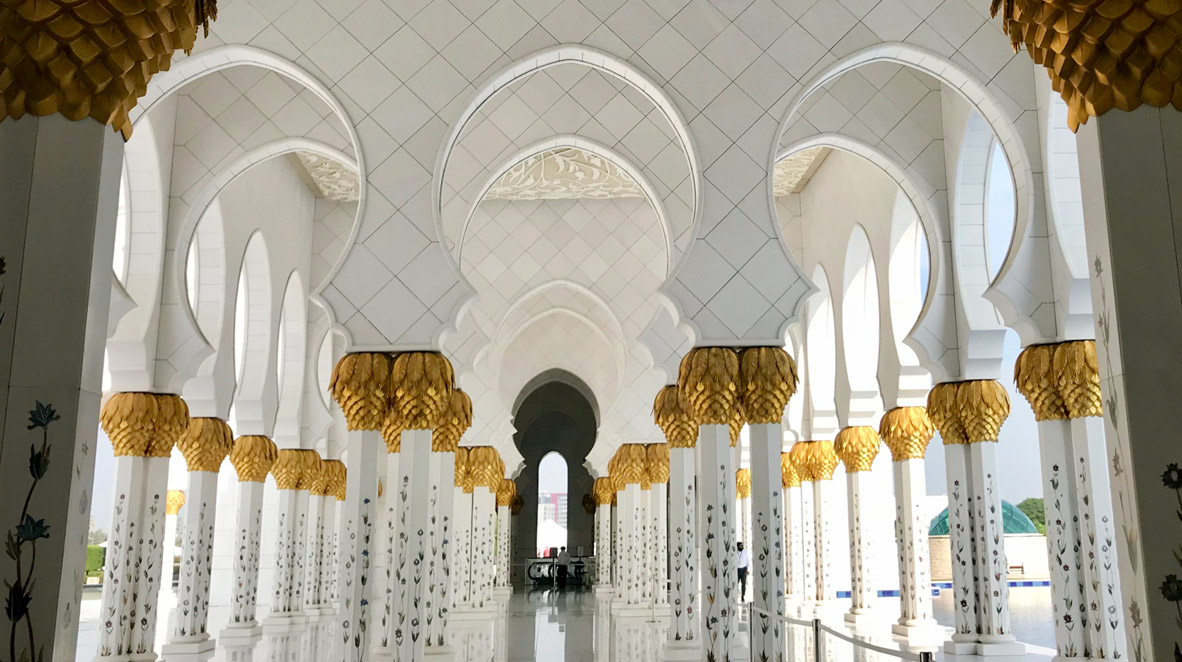 The interior of this white marble building, a jewel of the United Arab Emirates, is characterised by its sublime marquetry of precious stones.

The sumptuousness of the Sheikh Zayed Mosque, designed as a tribute to the various traditions of Muslim architecture, is measured primarily in figures. The third largest mosque in the world, it took 12 years to build between 1995 and 2007. It boasts 80 domes, 1,000 columns, the world’s largest Persian carpet, and seven monumental chandeliers weighing tens of tons. All this for an estimated total cost of between 500 million and two billion euros… But beyond these records, the most dazzling element of all is the interior architecture made of gold and precious stones, materials traditionally reserved for jewelry.

About twenty varieties of perfectly white marble were required to obtain this immaculate building. Imported from Macedonia and Italy, they cover both the exterior and interior. The floor of the huge central courtyard of 17,000 m2 is thought to be the largest example of stone marquetry in the world. Inlaid with lapis lazuli, amethyst, onyx, aventurine, and mother-of-pearl, it looks like a carpet with floral and organic motifs. Some resemble bindweed, others evoke Mughal art. All of them can be found on the murals and thousands of columns.

The entrance to the prayer hall is sumptuous, lined with white marble ceiling flooring and inlaid with glass mosaics, precious stones, crystals, mirrors, gilding and optical fibres interwoven with each other. The perfect build-up to the monumental chandelier… One of the largest in the world, 15 metres high with a 10-metre diameter, it is made of 24-carat gold-plated brass sheets and Swarovski crystal, just like the numerous mini-replicas. A total of 40 million of these sparkling and colourful elements were needed.

A breathtaking sight, and every bit as much a must-see as the Louvre Abu Dhabi.