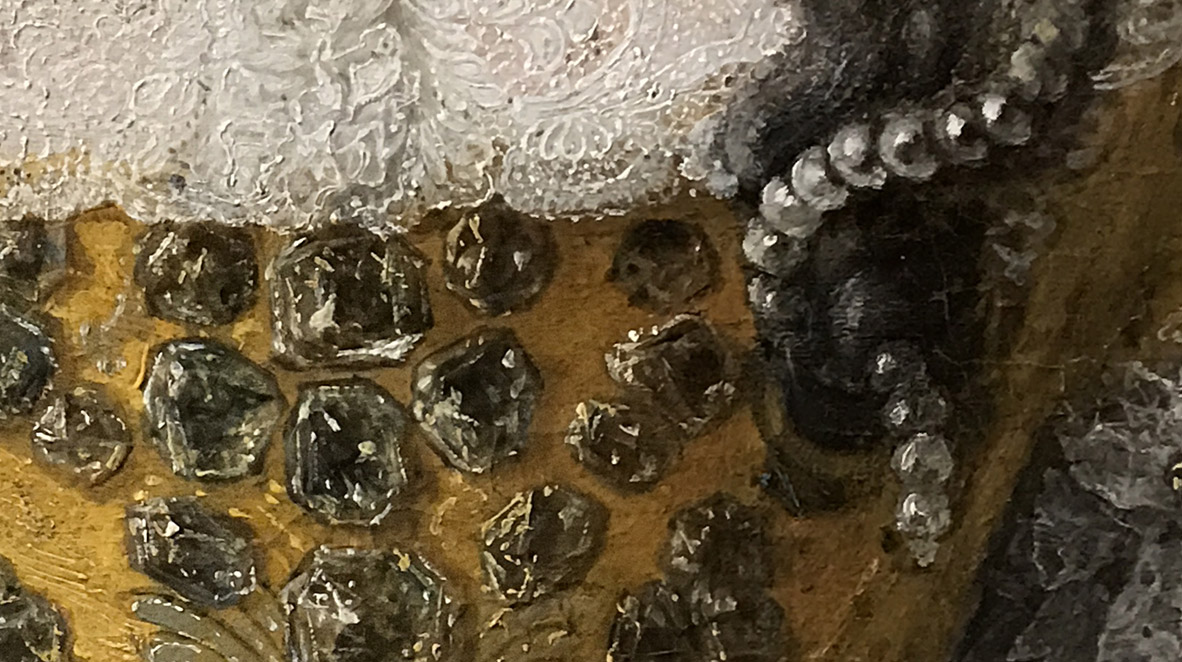 During his reign from 1643 to 1715, Louis XIV assembled all the conditions necessary to make Paris the capital of high jewelry.

The sovereign was not only passionate about gardens and court dancing, he was also mad about diamonds, giving them the place of honor to the detriment of pearls that were until then the object of all desires. This passion, fueled by Cardinal Mazarin’s bequest of 18 exceptional diamonds, allowed him to assert his supremacy and power. He incorporated diamonds into his apparel wearing them as buttons, on his hat, on his sword, in the buckles of his shoes, in buttonholes, on the braid of his pocket flaps and on the seams on the back of his frock coat. Once, to impress the Turkish ambassador, he even had a suit made that was entirely embroidered with white diamonds.

His passion was fed by Jean-Baptiste Tavernier. Considered as the forefather of all traders in precious stones, Tavernier made six voyages between 1631 and 1668, during which he would traverse 240,000 kilometers. He ventured into Turkey and Persia, visited an India infested with tigers, and he was even the first European to reach the famous diamond mines of the Golconda Valley. He brought back exceptional stones including the famous 115-carat blue-violet diamond that itself has an incredible story. A central figure in the history of the diamond, Jean-Baptiste Tavernier is currently the subject of research funded by the École des Arts Joailliers, which will present its work-in-progress at a lecture to be held on March 2nd, 2017.

In 1550, there were around 300 goldsmith’s workshops in Paris that excelled in the art of setting and mounting, whereas the best lapidaries were to be found in Holland. Louis XIV wanted above all to further enhance his diamonds, and so the French lapidaries greatly developing their skills, eventually surpassed themselves in the art of stone cutting and multiplied the number of the facets to increase the diamond’s brilliance and sparkle. They laid the foundation for the brilliant cut that still remains the best known today. Pierre Le Tessier de Montarsy, Sylvestre Bosc and Pierre Blain were all artisans devoted to the Sun King’s passion, and who would make Paris the capital of high jewelry during the second half of the 17th century.

A fashionable clientele in the style of Louis XIV

Louis XIV had sparked a phenomenal craze for diamonds and the aristocracy abandoned themselves totally to diamonds, to the extent of transforming Versailles into a sparkling theater. Hairstyles glittered with them under the candlelight and were reflected in the mirrors. Diamonds were embroidered on bodice fronts, fastened sleeves and were worn on scarves over brocade jackets. “Paradoxically, portraits of the time show little of this flamboyance which, on the other hand, is described in such texts as La Palatine’s memoires,” explains Gislain Aucremanne, historian at the École des Arts Joailliers. One of the best-known representations is that of Marie Leszczynska whose bodice front gleams in all splendor under adamantine embroideries.

During his reign, Louis XIV considerably enriched this collection initiated by Francis I and which belonged to the State. The Sun King made it the most sumptuous in the West. In 1691, it numbered 5,885 diamonds as opposed to 1,500 other gemstones and 500 pearls. There were 18 diamonds inherited from Mazarin (including the 55-carat “Sancy”) and those colored diamonds the King was mad about. The “Bleu de France”, set on the Golden Fleece and which was the symbol of his reign (now on display at the Smithsonian Institute) sat alongside the “Hortensia” with its slightly peach-pink color. In 1714, in a considerably more impoverished kingdom, Louis XIV was finally forced to refuse that ultimate, exceptional stone, one that would be acquired a few years later by the French Regent whose name it takes today.

The return of the "serti dressé"

Among all settings (claw, closed, etc.), the “serti dressé” remains rather unknown. Jessica McCormack made it her signature.

The collections presented during the Paris Jewelry Week at the beginning of July featured some real highpoints and unearthed some powerful trends. A quick...

TFJP and the Comité Colbert consider the use of gold in French couture. Here are three fashion houses that treat this precious metal as a supreme value.

Who is Anna Hu?