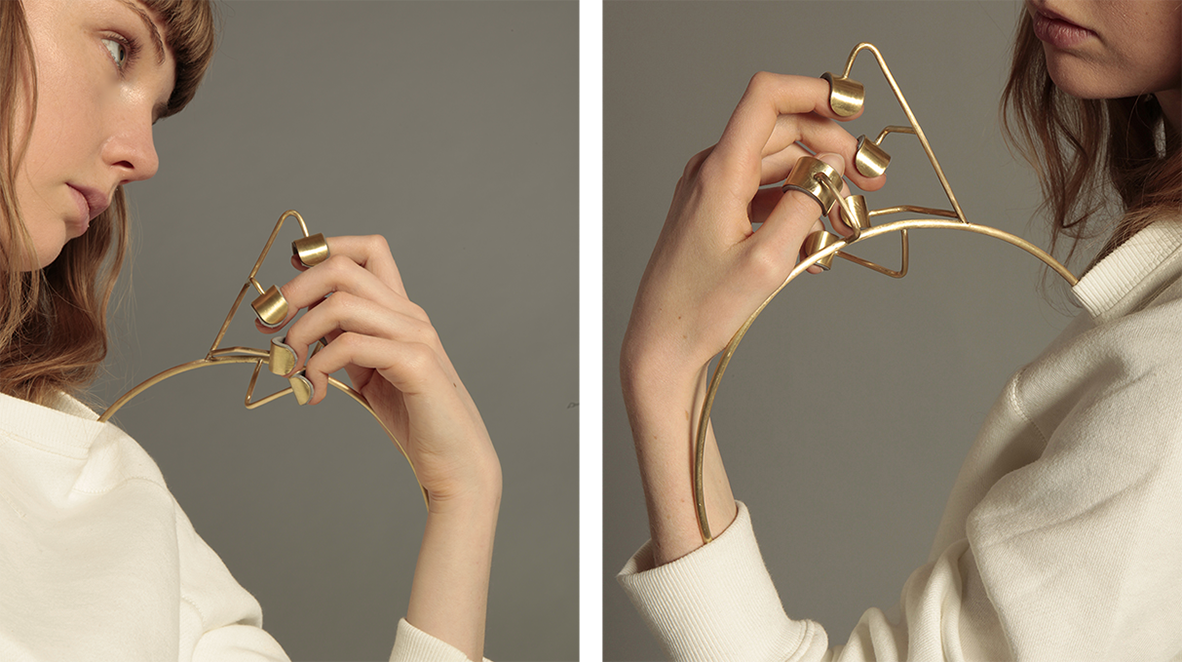 Don’t consider going out on the town wearing Puyuan Yang’s jewelry, as her pieces have more to do with works of art than jewels.

My appointment with this 25-year-old from Hong Kong and graduate of Saint Martins School, takes place in the studio of one of her friends, just west of Hong Kong. To reach the 15th floor of a block of buildings housing a labyrinth of warehouses, one must first confront the deafening clatter of metal trolleys and clanging lifts. In the concourse, the color flats and neon-lit Chinese ideograms would bring tears to Martin Parr’s eyes.

Puyuan Yang’s brass creations are not just jewelry; they are more akin to conceptual art pieces that one would expect to find in the most hip of galleries. These metal structures constraint the body and force it to take on postures of such mythical figures as the Discobolus, Botticelli’s Three Graces, Michelangelo’s David or his God the Creator in the Sistine Chapel. The resulting effects are classical gestures and baroque contortions.

To reproduce these poses, she’s developed a system of arcuate rods to slip under the clothes and to which are fixed hooks, the same ones that hold up works of art in museums. The head turns to the side and in an unfolding movement the arm is stretched out and the index finger projected towards the other arm taking on a similar pose. By looking at them, one can guess which works they refer to.

“My jewelry pieces are not ornaments. They are made to transform the body into a museum or contemporary art gallery object,” says Puyuan Yang. Born of a desire for experimentation, curiosity and even game-playing, their role is to question the notion of ideal beauty and the function of jewel. Unwearable, they are the heirs of pieces from 1960s by artists like Gijs Bakker. They also treat the overkill produce by those too-often seen pieces like ear cuffs, phalanx rings, double rings or hand bracelets set with diamonds, which brands infinity duplicate by the hundreds.