Home > Style > greek jewelry > Greece: what you need to know about the jewelry of Antiquity 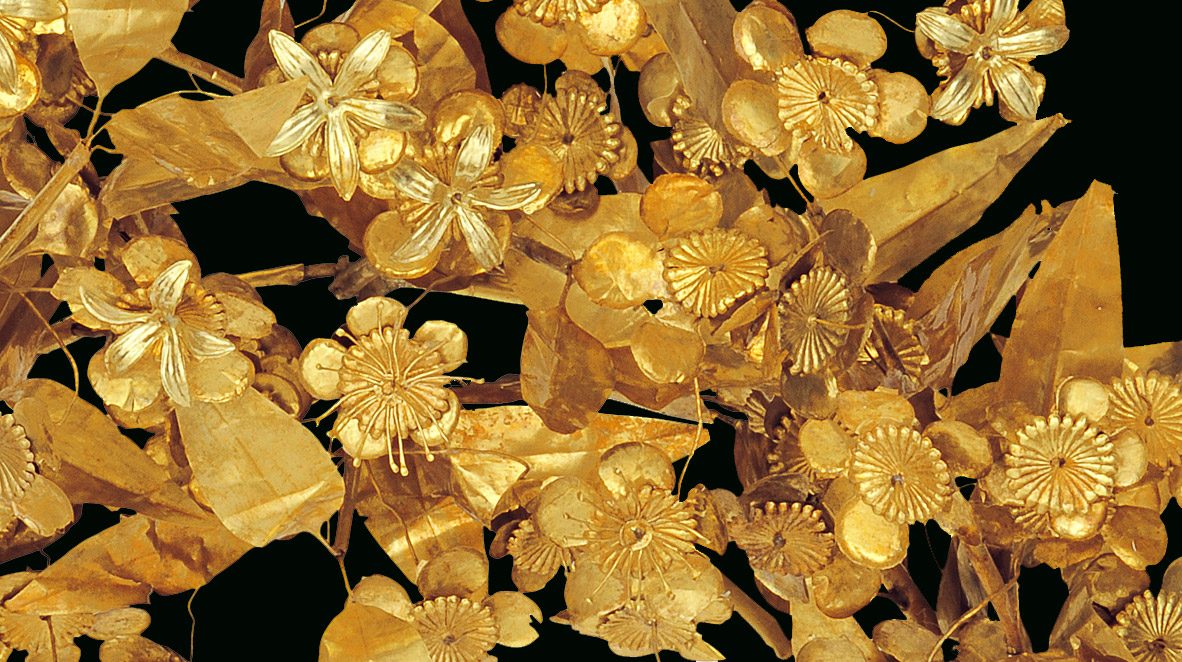 1- How old are the earliest pieces of jewelry?

The National Archeological Museum of Athens has some rudimentary jewelry in its collection that dates back to 7000 BCE and is made with bone, teeth, pebbles and horn. But the first truly remarkable jewelry was crafted by the Mycenaeans between 1600 and 1200 BCE. Discovered in the tombs of Mycenae, the hoard contains gems depicting octopuses, rosettes and golden butterflies, earrings in the form of spirals, and bronze fibulae with rock crystal heads, among other items. Everything was laid out around a centerpiece, the magnificent Mask of Agamemnon.

2- When did jewelry reach its pinnacle in Greek Antiquity?

The golden age of Greek jewelry in the second half of the 4th century BCE and in the subsequent 3th ans 2d centuries BCE is associated with Philip II of Macedonia and the conquests of his son Alexander the Great. In the tomb of Philip II in Aigai, Macedonia, northern Greece, and in several sites of the Hellenistic period archeologists unearthed some exquisite examples of the goldsmith’s art, demonstrating incredible mastery of metallurgical techniques. None of the gold surfaces is smooth: every piece is hammered, decorated with a raised pattern, in filigree or with granulation (that is, with microbeads of gold). The majestic crowns are crafted from intertwining golden threads with astonishingly realistic sculpted leaves. Everything is unbelievably dainty.

3- Was jewelry in Greek Antiquity reserved for the deceased, or did people wear it in life?

Although the majority of the Mycenaean and the Ancient Greek jewellery has been discovered into tombs, there is no reason to believe that it was reserved only for the deceased. We know from representations on wall-paintings, vases and also from figurines that people have worn ornaments in special occasions during their life. The fact that pieces of jewellery lie alongside the deceased in their grave, underline their function as symbols of status that was to accompany them safely on their journey to the afterlife.

4- Was gold the only metal used?

Most of the jewelry that has been preserved is made of gold but there is also some splendid pieces made of silver, bronze or electrum. There was not enough gold in Greece, and the limited supply made it extremely valuable. Gold is also very malleable, meaning it is easy to work with and can be hammered into very thin sheets less than 1 mm thick—as they did for instance in the Mycenaean ans Hellenistic periods, to be economical. Alexander the Great’s conquests around 335-323 BCE were partly motivated by that era’s compulsive pursuit of gold (and wealth in general).

5- What designs are characteristic ?

Hundreds of motifs drawn from nature, mythology or architecture include amphoras, octopuses, snakes, butterflies, the reef (or Hercules) knot, and Eros. The oak leaves on many of the crowns mimic ibex heads on the open ends of a bangle. A medallion shows Athena wearing the head of Medusa. It was not until Alexander the Great’s conquests that polychrome jewelry began to appear, when the lack of indigenous gemstone deposits was remedied with Eastern imports of emeralds, turquoises, rubies and lapis lazuli.

6- Why is jewelry from Greek Antiquity still so popular?

We continue to draw endless inspiration from the jewelry of Greek Antiquity, feeling an abiding fascination for its mythology, its pure forms, the bright clarity of the almost solid yellow gold, its patina, the slightly irregular hand-crafted finishes, and its symbols. An infinite rollcall of contemporary brands like Marc Auclert, Marie-Hélène de Taillac, Cleopatra’s Bling and Alighieri are reproducing its classical shapes, designs, and techniques like granulation, and some even incorporate genuine antique gems. Some Greeks like Christina Soubli or Nikos Koulis who stylizes the knot of Hercules or the snake thanks to the chain of the same name.

Thanks to the Hellenic Cultural Center (Paris) and Aegean Airlines