Home > Style > Andréa Guinez and the meaning of jewel 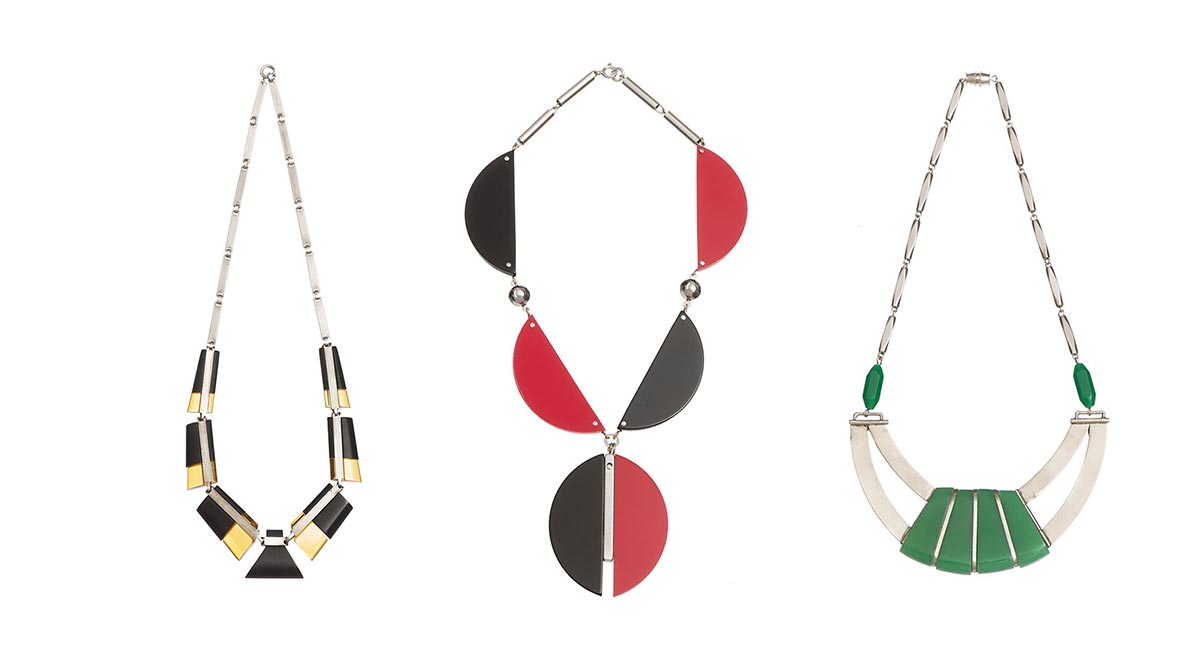 At the Saint-Ouen flea market, Andréa Guinez offers a unique selection of jewelry in steel, Plexiglas and Bakelite from the 1920s to the 1980s. Going beyond design, this trained sociologist focuses on their meaning and their history.

Why did you set up at the Paul Bert market amid the furniture and object sellers?

This market is dedicated to those personalities who offer a quite different choice of highly specific selections that sometimes go beyond typical tastes, like mine does. This attracts a public that’s curious and with a good cultural background, which is able to understand the value and interest of often unsigned jewelry pieces.

You defend the idea that “jewel is not only made to go with a dress, but it also has meaning and a story.”

During my studies on primitive societies, I discovered that it was a social vector in all cultures. Take for example, the use of steel during the crisis of 1929 and in Arte Povera: it finds an echo in the Birmingham school and evokes the jewelry made of iron in Berlin during the invasion of Prussia by Napoleon. At all those different times they refer to shortages. So to tell these stories I also present pieces of the eighteenth century for example.

You have a clear predilection for the jewelry of the early twentieth century, including Bakelite and galalith.

Until the end of World War II, these jewels were produced in Oyonnax, a town located between Lyon and Geneva. Today Bakelite made from allergenic resin based on phenols is very expensive to produce and has thus disappeared. However, galalith (protein based) is still used and it characterizes this colorful jewelry piece from 1979, manufactured by Guillemette L’Hoir. Both materials were favorites of Jakob Bengel.

You are an expert on Jakob Bengel. Who is he?

A German from Idar-Oberstein, the cradle of Art Deco, I track down all his pieces because I greatly admire his work. In the 1920s, he began producing jewelry in steel, in chrome surface-treated with palladium or platinum, in Bakelite and in brickwork, a small metal mesh of elements evoking bricks. Manufactured like mechanical parts with riveted metal hinge systems, at the time they were worn by intellectuals and the avant-garde like Nancy Cunard. We often don’t realize but he was one of the manufacturers of Gabrielle Chanel and Jeanne Lanvin, including during the war. His jewelry has lots to tell: politics are politics and artists themselves remain artists who do not care much about regimes.

His jewelry inspired by mechanics and speed influenced Jean Dunand and Gérard Sandoz who interpreted them in precious metals and gemstones. Paco Rabanne, Jean-Marie Poinot, Pierre Cardin … Later, jewelry by Pop Art artists and those of the modern movement in the 1970s were other revivals with their mixtures of metals and Altuglass, precious woods and so on. Simply place one among Jakob Bengel’s jewelry for this to become obvious; it raises questions and discussions.