Home > My Agenda > The exhibition “Gold by Yves Saint Laurent” 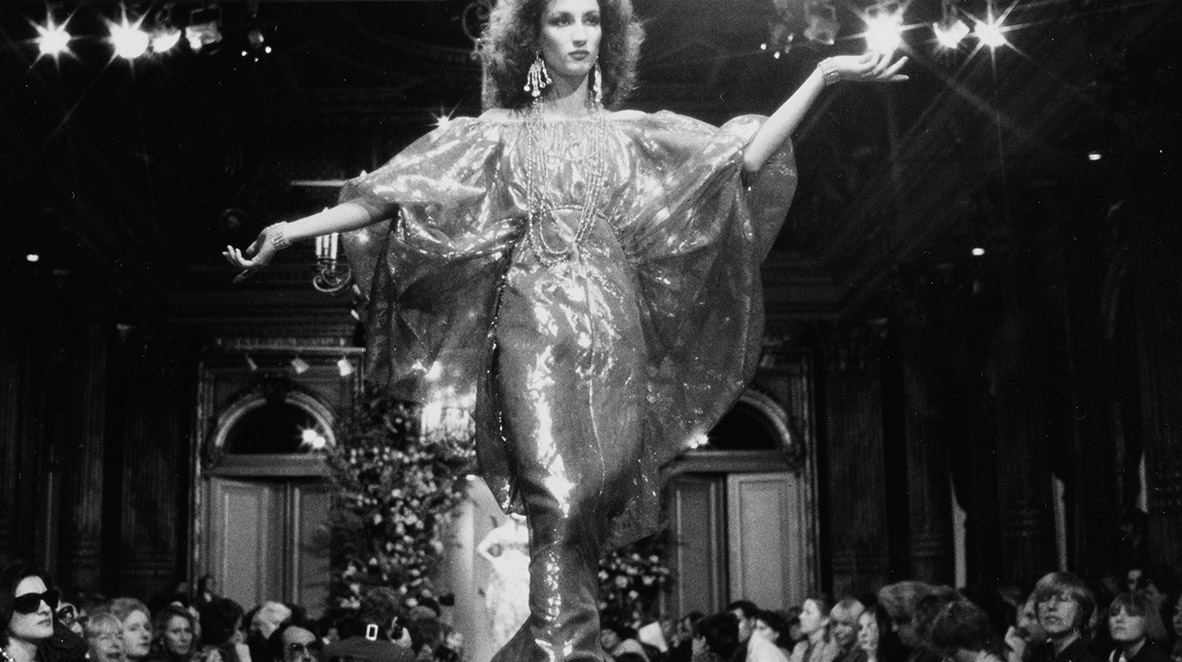 The exhibition “Gold by Yves Saint Laurent” celebrates Yves Saint Laurent’s predilection for the color of the precious metal. The glittering show coincides with the 60th anniversary of his first collection and the arrival of Elsa Janssen, the new director of the Paris museum.

A multitude of uses

The various golds here are by turns bright, slightly coppery, lamé, or used in brocade, embroidery, or sequined form. “The idea came about during a visit by Elsa Janssen to the archives of the YSL museum in Marrakesh, to which we lend a few pieces every year” explains Judith Lamas, in charge of the textile and accessories collections. She experienced a sort of esthetic shock when she saw all the golden clothes piled up next to each other. Such a thing could never happen in the reserves of the Parisian museum, which are classified in chronological order.

For this first exhibition devoted to gold, the idea was to feature pieces that were little known and little exhibited. Most of the 39 textile works come from the Paris museum, which boasts a collection 7,000 pieces strong. This abundance is a result of the patrimonialization policy that dates back all the way to 1974, when Yves Saint Laurent had already begun scribbling the letter M on the cards of each garment that he wanted to integrate into the museum. And by 1981, Hector Pascual had been appointed curator.

A passion for gold

“I love gold, it’s a magical color”; “for the reflection of a woman, it’s the color of the sun,” said Saint Laurent. We do not know exactly where the designer’s predilection for gold came from, even though he often referred to it in his interviews. “He read a lot and regularly visited the great museums: he was very familiar with the Hall of Mirrors in Versailles, the Apollo Gallery in the Louvre and the Baroque decorations of the 18th century,” says Judith Lamas. Of course, even though the fabric is rarely analyzed, it’s not real gold: the lamé for example is made of metal-plastic threads and therefore much lighter, more fluid and shiny.

The chronological approach of the exhibition “Gold by Yves Saint Laurent” highlights the fact that the designer used the color in his very first collection and indeed throughout his career. The earliest pieces in the “Swinging Sixties” section include a cocktail dress embroidered with gold and silver metallic threads and sequined embroidery or another embroidered with a snake wrapping itself around the body (by Rédé). The latest examples date from the Palace years. Along the way, he challenged the preconceptions of gold’s association with wealth and haute couture by using it, for example, in the Rive Gauche ready-to-wear collection in 1991 with a finale of models dressed entirely in gold. The show remains a fashion milestone to this day…

From detail to total look

The designer also used gold in delicate touches, as evidenced by the theme dedicated to golden buttons. “They replaced the sort of daytime jewelry that Yves Saint Laurent didn’t like,” explains Judith Lamas. On the other hand, the designer daringly produced some all-gold dresses such as those draped in antique lamé fluid revealing back and necklines (1994-1995) or the stage costumes of Zizi Jeanmaire and Sylvie Vartan. Incidentally, Vartan lent the costume created for her 1972 performance of Olympia to the exhibition. Another marvel on display is the extraordinary jewel dress in gold sequins encrusted with a jewel belt immortalized by David Bailey for Vogue in 1966. It belonged to the American socialite Nan Kempner (who died in 2015) who was of the firm opinion that: “You never feel flashy in Saint Laurent”.

In the exhibition “Gold by Yves Saint Laurent” more than 300 pieces of jewelry created by Loulou de la Falaise (and made by Goossens and Scemama, among others) are displayed by her daughter, Anna Klossowski de Rola (a subject to which TFJP will return in a special article). Some 150 objects also take pride of place in a cabinet of curiosities designed by set designer Valerie Weill: the thimble and a pair of scissors from the studio (usually exhibited in the museum) line up alongside others linked to the personal world of the Bergé-Saint Laurent relationship (especially from the collection sold at Christie’s in 2009). For Yves Saint Laurent, gold was ubiquitous, including in his perfumes. For the first time, we discover one of the rare bottles of “Champagne”, recently acquired by the museum: launched in 1993 “for happy, light-hearted and sparkling women”, it was renamed “Yvresse” in 1996 following a lawsuit served by the Comité interprofessionnel du vin de Champagne. Enjoy your visit!