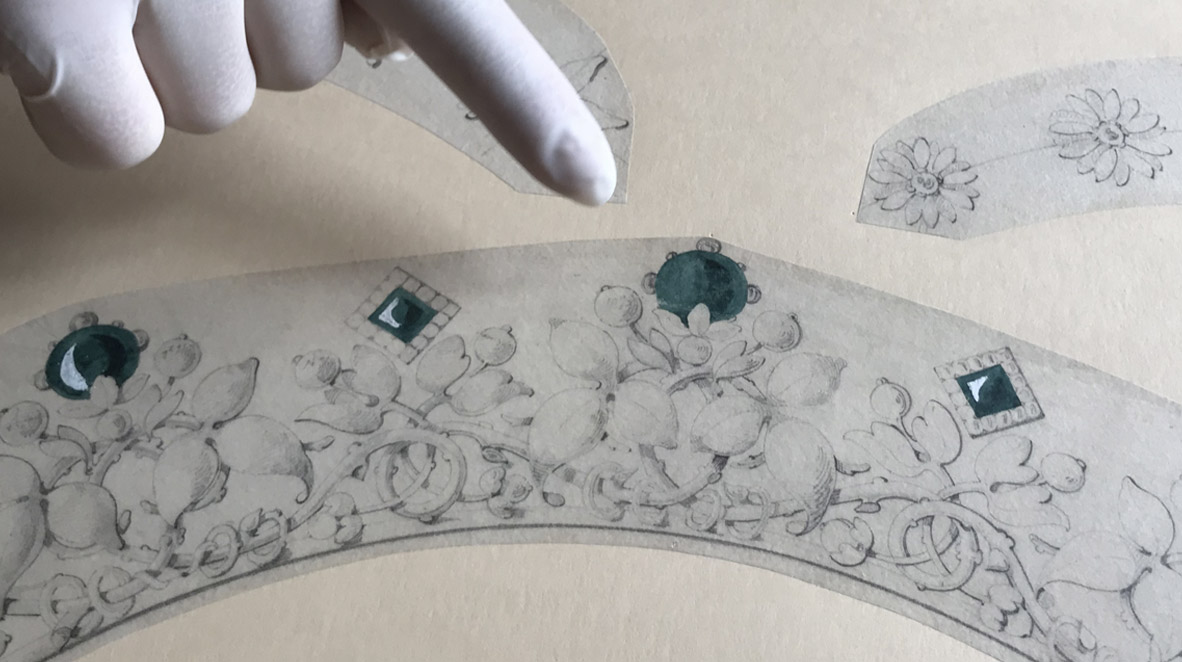 The French jeweler unveils some remarkable jewelry drawings that are also gems of art.

At the 27th salon du Dessin, Chaumet is unveiling 38 drawings of head jewelry, including the winged headband made for Gertrude Vanderbilt and the diadem of Empress Marie-Louise. At another exhibition, “The art of the stroke” in its historical rooms, the jeweler is presenting 50-odd designs inspired by architecture, dating from the 19th century to the 1970s: a way of highlighting the rich variety of its unique collection of 80,000 drawings. “The raison d’être of a jewelry drawing is the technical, practical side,” says Bertrand Gautier, a founder member of the salon du Dessin. “Originally, it met the need to show a model to another trade.”

While delicately leafing through the album “1825-1855”, the company’s archivist tells me that “these books were probably put together by draftsmen when they left the company.” On the pages, sketches of designs rub shoulders with finished drawings that are positive works of art. They are done in graphite, gouache or watercolor on different media: tracing paper, laid paper, card or rhodoid, depending on the fashion and the draftsman’s taste. On a diadem, pencil lines are highlighted with gouache, carefully worked to express the contours of the diamonds, while a wash conveys the transparency of an emerald. White adds a touch of light; gray gives roundness to a pearl. The play on foreground and background creates effects of shade and depth. Micro-numbers are sometimes written in the positions of stones. Like codes…

Some were altered, or never produced. Others, cross-referenced with invoice or order books, can provide clues for identifying a piece of jewelry. All of them are an inspiration to the design studio now run by Claire Dévé-Rakoff. But they are extremely fragile, and can be damaged by the wrong temperature, exposure to light or the acidity of the paper. So in 1995, a mammoth digitization project was launched to identify them and facilitate access for the curator, the marketing department and the design studio. “And we continue to archive the corpus of each new collection for future designers,” says Guillaume Robic, the heritage director of the company, which was one of the first to realize the importance of this process. The appearance of photography has in no way supplanted drawing, any more than computer software.

Although not originally designed to please, jewelry drawings are touching, and make us fantasize. But don’t imagine that you can start a collection: “Generally speaking, very few jewelry drawings turn up at auction or with dealers,” says Bertrand Gautier. “And when they do, they are immediately snapped up by jewelry companies.” Because legally, they are considered their property and should never have left their workshops.

“The art of drawing at Chaumet: Imagining – Creating” from 21st to 26th March 2018 at the salon du Dessin, Palais Brongniart, Paris.

« The art of the stroke » from 23th to 30th March at Chaumet, visits by reservation only.