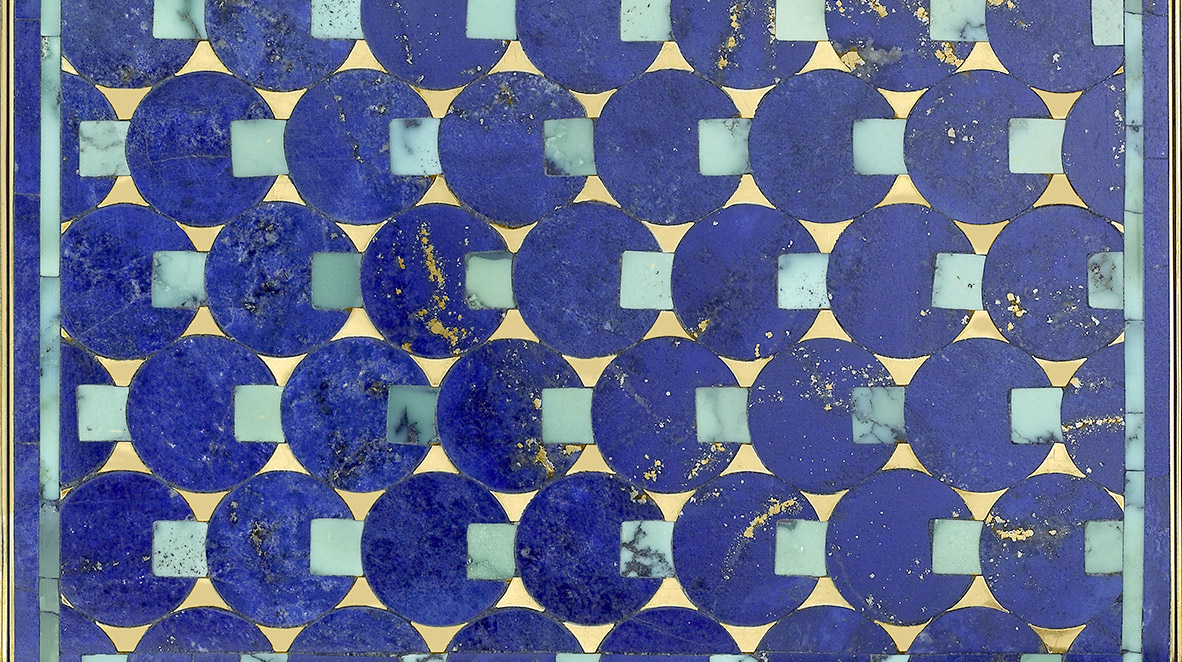 Creation is often mysterious, and Évelyne Possémé and Judith Henon-Raynaud, the curators of this exhibition, offer us a glimpse of this fascinating process.

1/ Witnessing the birth of an esthetic

“The exhibition takes a positive look at Islamic art, showing the impact on designers who were able to open up to new ideas and draw inspiration from them,” explains Évelyne Possémé, head curator of the antique and modern jewelry department at the Musée des Arts décoratifs. This new esthetic from the Arab-Persian world, India, Egypt, etc., composed of geometric shapes and bright colors, generated more abstract jewelry, juxtapositions of new stones, etc. at Cartier from 1903-1904.

2/ Rediscovering the treasures of the Orient

This highly documented exhibition brings together a total of 600 objects, including 250 pieces of jewelry, some sixty pieces of Islamic art, a hundred drawings and various documents such as glass plates. The marvels include a 14th century mosque lamp, a 15th century agate cup from Afghanistan, a 16th century Iznik ceramic dish, domes and minarets, a 19th century Indian bazuband, 15th century Persian miniatures, etc.

This exhibition does not merely tell us that jewelry is inspired by the arts of Islam. It shows us! The curators reconstruct the creative process by juxtaposing the jewelry, cigarette cases, belts and clocks with their source of inspiration. Their Islamic influences thus seem obvious: mandorles, cypresses, stars and triangles, bindings, wallpaper motifs, etc.

4/ Getting to know Charles Jacqueau

“Between the source of inspiration and the final object, the creative process was also enriched by the study drawings of Charles Jacqueau, the company’s most important draughtsman between 1911 and 1935,” explains Judith Henon-Raynaud, head curator of heritage and assistant to the director of the Louvre’s Department of Islamic Art. Taken from the collection held at the Petit Palais (comprising 4,200 drawings and personal notebooks), they represent an intermediary stage that isolates the elements of the source of inspiration, a sort of dictionary of arabesques, rosettes, step pyramids, etc.

The two curators have drawn up a list (not exhaustive but the most complete to date) of Louis Cartier’s collection of Islamic art, comprising more than sixty works. This constitutes a major event, as part of the collection was stolen during the Second World War and dispersed after his death (mainly in the United States) and has never been fully documented or catalogued. This phenomenal task required no less than 3 years of work and today offers us the opportunity to admire pieces of exceptional workmanship that sometimes belonged to historical figures.

6/ When jewels are the stuff of dreams

To illustrate the influence of Islamic art, Cartier has assembled some of the most beautiful pieces in its history. The enormous rectangular Colombian emeralds in the centre of a belt brooch or a diamond necklace leave you speechless. The spectacular Hindu necklaces with their typically Indian mix of sapphires, rubies and emeralds are just as unforgettable. Then there are the dazzling tiaras, with their stepped pyramid or mandorla motifs, their engraved turquoise, their interweaving of pearls and diamonds. And don’t miss the cigarette cases either; albeit less spectacular they are absolutely delightful with their lapis lazuli, enamel, mother-of-pearl and coral motifs…

One visit will not be enough – you have been warned!

“Cartier and the Arts of Islam”, in the footsteps of Louis Cartier…