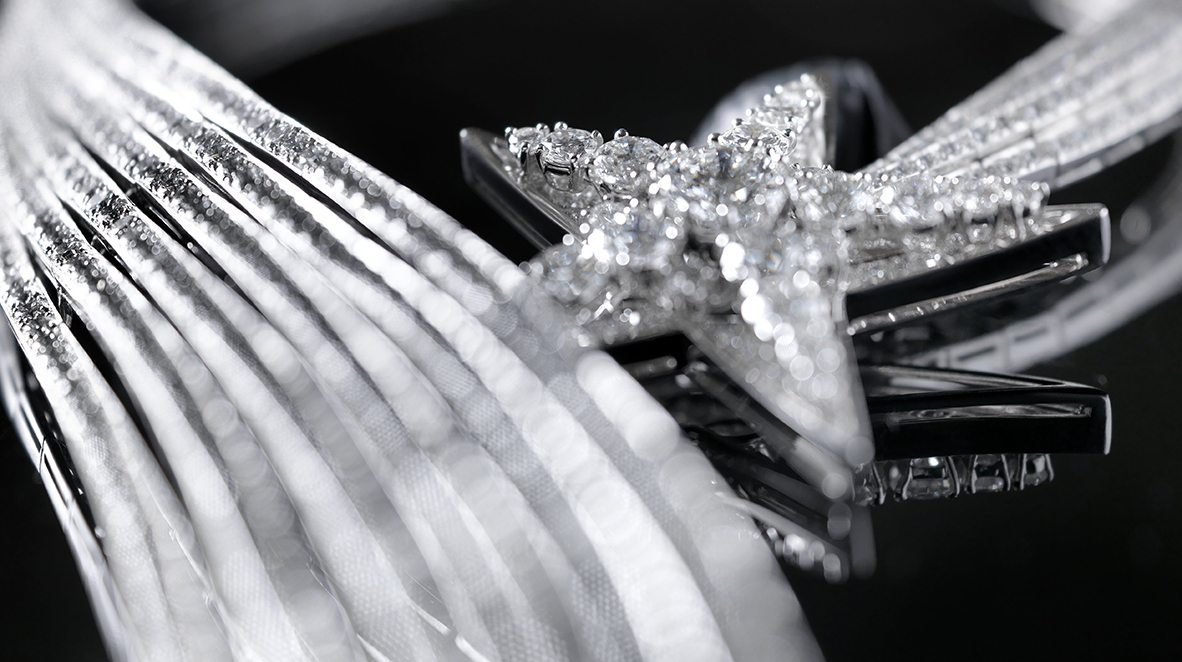 In the collections stars, constellations, moons and suns gravitate.

Buried thousands of kilometers below the Earth’s surface, precious gemstones are intimately linked to the stars gravitating far above thousands of light-years away. Yet they both share the same sources, as they were all formed billions of years ago under extreme temperatures and phenomenal pressure. Might this explain these jewelers’ fascination for the cosmogony?

Between figurative and abstraction, poetry and the rigors of science, Alexandre Reza features crescent moons in dark gold set with diamonds. Solange Azagury-Partridge creates rings in the form a diamond around which stars revolve. Stars were at the center of Elie Top’s first two collections entitled “Mécaniques Célestes” and “Étoiles Mystérieuses“. Andrea Fohrman for her part multiplies spatial figures and even goes as far as personalizing a medallion set with gemstones reproducing the moon phase on the day of her birth.

Jewelers love the idea that the universe is ordered and in harmony, and to think that a network of analogies links us to the earthly world. To connect us with the beyond, what better than mysterious gems like star sapphires, opals and tiger-eye. The spherical pendants of the Lebanese jeweler, Noor Fares, are sculpted in gemstones with opalescent and iridescent reflections, and in moonstone and labradorite at the center of Blackbird and the Snow‘s collections.

This very current cosmogony theme, in the past inspired such spectacular pieces as Mademoiselle Chanel’s “Comète” necklace of 1932. The house re-acquired this piece during the creation of its jewelry division and has turned it into an easily recognizable code at the base of a number of collections with such evocative names as “Voie Lactée” and “Ciel Étoilé” among others. A magnificent Big Bang.