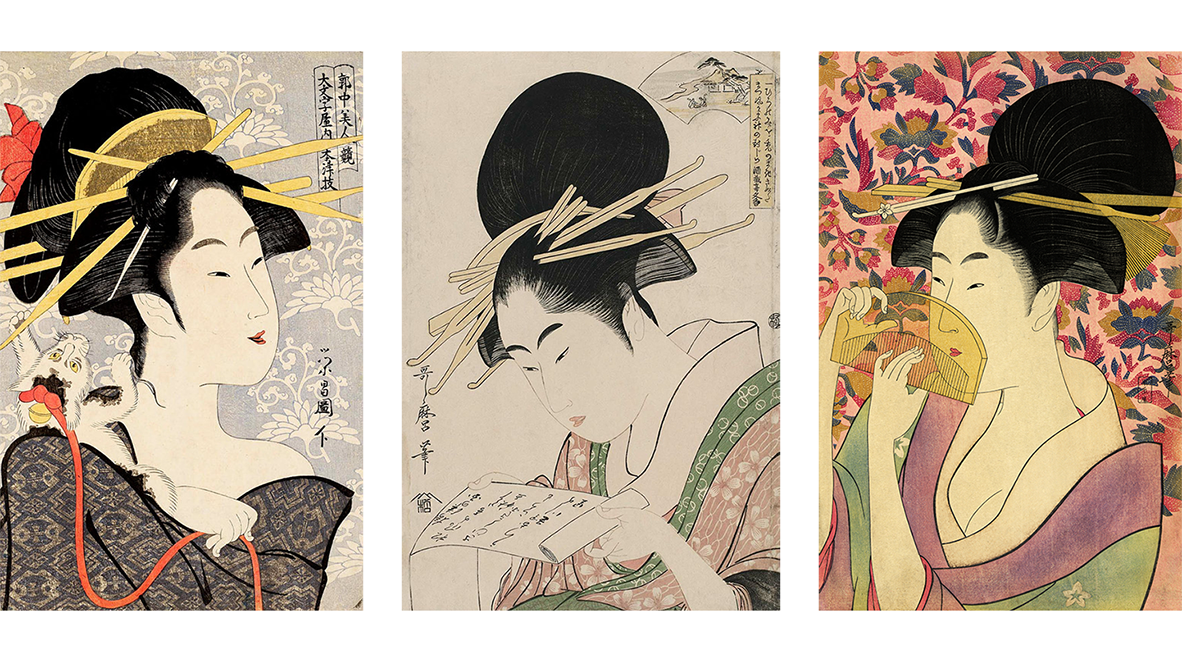 Until the nineteenth century and the Meiji era jewelry may seem to have been absent from Japanese culture, and yet this country has greatly influenced French jewelers.

The all-concealing kimono with its large sleeves leaves little room for bracelets and necklaces. The sash-like obi and the fabrics with their patterns and colors give some indications of social status, wealth and taste. According to Gislain Aucremanne, historian and teacher at the Van Cleef & Arpels School: “there are no mines for precious stones in Japan, which can also explain this absence“.

Hair ornaments, a woman’s only jewelry

As we can seen in prints, women’s hair was pulled up, oiled and arranged in chignons and decorated with horn hairpins, silk flowers or combs. With their teeth representing rays of light, these combs would help to communicate with the natural powers. The Guimet Museum’s beautiful collection of around two hundred pieces displays the richness of their decoration.

French jewelers were influenced by the stylized representations of nature they saw in Samuel Bing’s Le Japon artistique magazine, and in the Japanese pavilion at the 1867 World Fair. They reinterpreted the cherry blossoms, magnolias and wisterias, along with the chrysanthemums, a symbol of the imperial family. They also borrowed the cock, bamboo and aquatic plant designs. The decorations on the lacquered inrô, the small nested boxes hung on the obi were also sources of inspiration along with the tsuba sword guards. René Lalique created brooches based on these with the same round shape and featuring a central hole where the blade would have passed through.

Lalique, the most Japanese of French jewelers?

Not quite so. Lucien Falize and Henri Vever, today unknown to the larger public, were also very influenced by Japanese aesthetics. According to Évelyne Possémé, head curator of the Musée des Arts Décoratifs and head of its Art Nouveau and Jewelry departments: “Lucien Gaillard is the one who pushed this Japanese spirit the furthest. He perfectly understood what underlies Japanese art and its principal quality: the design’s instantaneous and clear readability“.

A passion for the tiara

Catching on in 1889 during the Meiji era, when during official appearances, the Empress abandoned her traditional dress for a court cloak and a tiara which served to rekindle and consolidate political and diplomatic relations with the West. “This tradition of hair jewelry fuelled the fascination,” says Gislain Aucremanne. In 2007, the most beautiful of all tiara exhibitions took place in Tokyo and presented legendary models by Cartier, Mellerio, and Chaumet with its Bourbon-Parme and the Mary Stuart aigrette tiara. Today, to satisfy this insatiable passion, the Japanese jeweler Tasaki loans a tiara along with all engagement and wedding rings purchased.

Japan accounts for between 10% and 15% of the jeweler market. In a country where “tiny” rules for everything from gastronomy to gardens, women consume small jewelry pieces and their observant eye takes in every detail from a chased design, to a curve or a reflection. They also love limited series. “Engagement rings represents 90% of the rings sold and the ring necessarily comes from a major brand, as this market is strongly marketed by them,” says a representative from the sector. The best-sellers are Cartier’s “Love”, Boucheron’s “Quatre” and Chanel’s “Coco Crush” in the XS version.

"It's time to change!" by the Madnetwork consulting agency

“It is undoubtedly the luxury segment that has suffered the most from the crisis,” the Madnetwork consulting agency’s study states.

In the midst of the lockdown, Courbet succeeded in raising an impressive €8 million. A conversation with Manuel Mallen, founder and president of this...

Still ignored as late as the 70s and 80s, colored diamonds are now fetching astronomical prices at auction. Their unique value based on nothing but the...