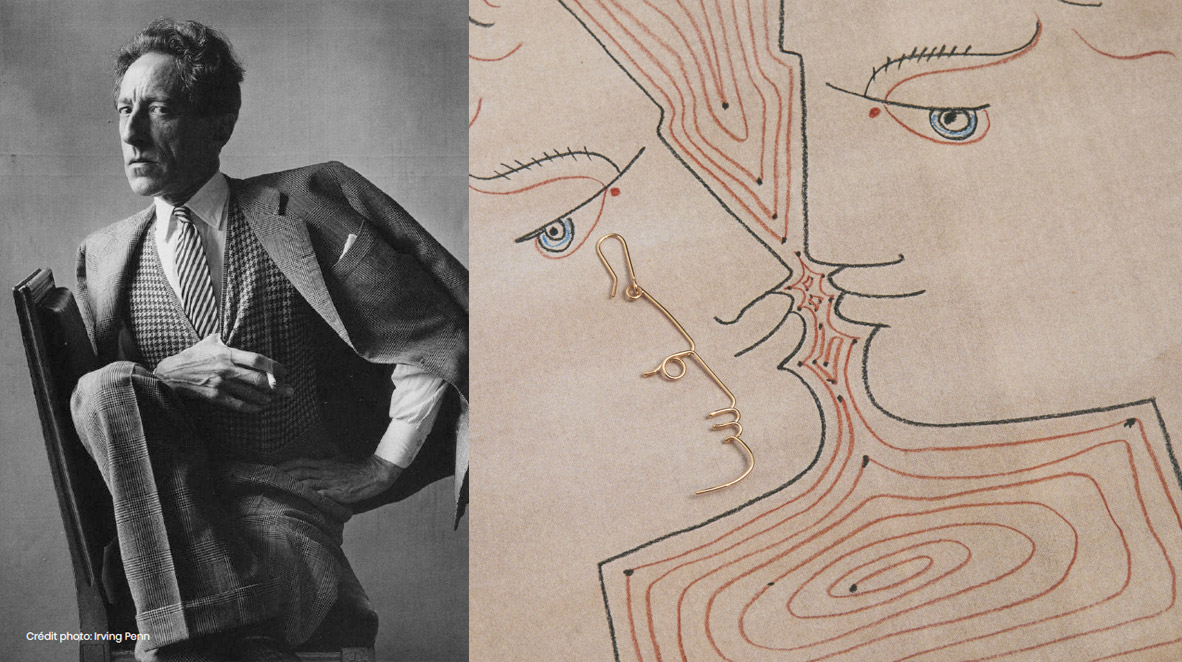 Atelier Paulin’s collaboration with the Comité Jean Cocteau takes the form of a first collection of limited edition jewelry reminiscent of the work of this multidisciplinary artist, who was one of the most influential of the 20th century. A conversation with Dominique Marny, President of the Comité.

Sandrine Merle. You’re the only direct descendant of Jean Cocteau.

Dominique Marny. I am his brother Paul’s granddaughter and I succeeded Pierre Bergé on the Comité in charge of overseeing the image, rights and promotion of Cocteau’s work. These days, we end to forget artworks very quickly, so we need more than ever to make an effort to remember: not only must they endure, but they must not be tarnished by misinterpretations. With each new event, we ask ourselves the question: “Would he have liked it?”

S.M. How did this collaboration come about?

Dominique Marny. It was thanks to my daughter who immediately grasped the perfect coherence between the thread, the writing, the drawing and the work of Cocteau. At the Comité, I surrounded myself with young people because it’s important to keep the vision up to date by liberating it from the old ways of doing things. Youth and audacity were very important to this artist. We need a new language to appeal to the 20-30-year-olds who often know nothing about this surrealist artist, writer, poet, philosopher, filmmaker, painter. At most, they’ve heard of La Belle et La Bête (1946)…

S.M. On the necklace, it seems the sentence “j’ai votre voix autour du cou” taken from one of the most famous monologues in French theatre, was written by Jean Cocteau himself!

Dominique Marny. Anne-Sophie Baillet has pulled off the feat of reproducing Cocteau’s writing, which changed throughout his life: in 1962, he was not writing as he had been in 1935. On a bracelet, this handwriting highlights his favorite precept: “à l’impossible je suis tenu”.

S.M. What are the references behind this first collection?

Dominique Marny. It’s very rich, it’s a blend of works, pet themes and recurring motifs such as The Testament of Orpheus (1960), invisibility, the crossing of the mirror, the double, the angel Heurtebise, the serpent. We also find the star (pre-1945 version) that goes together with his signature.

S.M. Cocteau is closely linked to jewelry: he made Cartier’s Trinity ring famous by giving it as a gift to Radiguet and he also inspired a collection by designer Jean Vendome.

Dominique Marny. He was as interested in jewelry as in any objects. He started by working with Madeleine Vionnet then with Elsa Schiaparelli and especially with François Hugo. His entourage also included Jeanne Toussaint (whose husband had been in the war with Paul Cocteau), a great friend of my grandmother’s, who worked at Cartier. I remember that extraordinary woman very well:  austere, in a black dress with a diamond cinch. She was an important part of my life.

S.M. Do you have any favorite pieces?

Dominique Marny. Every piece of jewelry reminds me of something… I’m particularly attached to the “Profile” earring and the bracelet that says “j’ai votre voix autour du cou”. And I’m looking forward to discovering the many models that will highlight these 5 years of collaboration.

“Diane Venet’s ideal collection” at the Museum of Decorative Arts