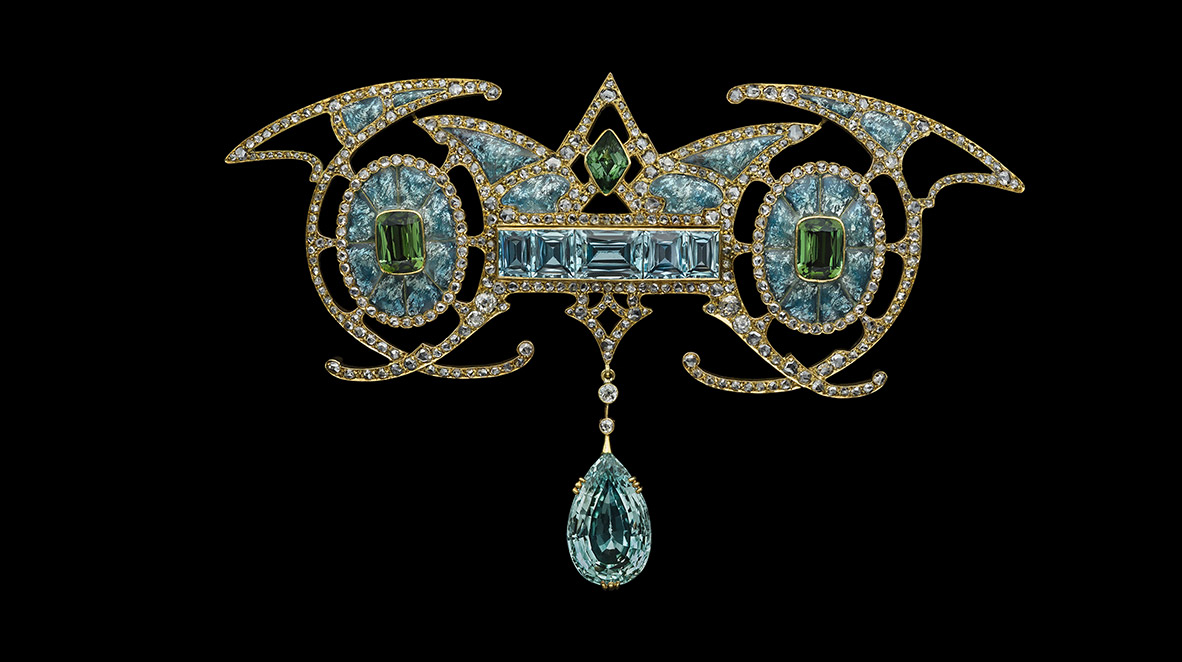 This Japanese dealer and collector who’s one of the most important in the world, has just opened a showroom in Paris. But I paid him a visit in Tokyo.

It’s to the sound of Gregorian chants that Kazumi Arikawa welcomes leading collectors, museum curators, historians and personalities to his Tokyo offices. Photos with the likes of Jacques Chirac attest to the prominence of these figures. And for good reason, this Japanese sexagenarian possesses some of the most beautiful and sumptuous jewelry pieces in the world, and they are for the most part French. But no question of seeing these wonders without being fittingly prepared with a tea ceremony, although probably a reduced and watered down version … Seated cross-legged in front of me in this room completely clad in tatamis, Kazumi Arikawa tries to instill in me certain gestures like turning the bowl several times with one hand while gracefully gesturing with the other. This experience is quite disconcerting and I am far from the comforts of Place Vendôme and its showrooms.

The casualness of the great

With no further ceremony Kazumi Arikawa hands me the jewels. Some are invaluable and yet he doesn’t wear white gloves to handle them. Just like Munnu Kasliwal did at Gem Palace, when he took out his Indian jewels and piled them in front of me without the slightest concern. That incredible experience of holding in one’s own hands what usually is in a museum showcase. Kazumi Arikawa urges me to touch them, and to turn this Renaissance enamel pendant over to reveal Cupid’s chubby enamel buttocks. Among the jewels from the 19th century, his favorites, is the sumptuous diamond thistle brooch by Loeuillard made for Boucheron. Enamel necklaces by Lucien Falize rub shoulders with those of the Art Nouveau period and the inevitable René Lalique. Kazumi Arikawa’s most recent creations date from Art Deco, as the excellence of the French workshops greatly impresses him. Georges Fouquet’s mint aquamarine and green tourmaline brooch is breathtaking.

Beauty at the center of all things

Kazumi Arikawa discovered jewelry during a visit to the Victoria & Albert Museum while he was a dealer in Japanese antiques in London. A real shock for someone who today, makes a return trip to Paris just to admire the exceptional pieces in an exhibition, as was the case for the Cartier exhibition at the Grand Palais. Above all, he considers jewelry as a means of freeing himself from materialism and approaching the divine. “In the end, I am not interested in the story behind a piece, its origin, the power it symbolizes or the status it conveys. For me, everything lies in its beauty and its ability to create emotion,” explains this man who in his youth spent two years as a monk in a Zen temple. He is also someone who can equally speak gemstones with a scientist or with the Dalai Lama, whom he’d met a few years ago.

A passion of tiaras

While his business was still of modest size, he came across a Fabergé diamond tiara whose price was roughly equivalent to half the value of his entire collection. But he managed to raise the funds … “We know today that there are only four in the world,” he explains. “That served as a lesson to me and I now buy without worrying about the price. I’m probably crazy, but luckily there are people even crazier than I!” According to one expert in the jewelry market, “he created the craze for tiaras in the early 2000s and this is the reason that some now exceed a million dollars today“.

In 2007, for an exhibition dedicated to tiaras in Tokyo, he lent among others, a tiara once belonging to the Countess of Flanders, one to the Archduchess Isabella of Austria and another from Chaumet representing the wings of Valkyrie. Without his loans the exhibition Parures du pouvoir. Joyaux des cours européennes that took place in Brussels that same year would not have been what it was. He has lent many pieces packed full of history and emotion, such as the pendant with Napoleon I’s portrait, which the latter took with him to Saint Helena, or another more modest one that the Empress Eugénie took with her when she was exiled. The sumptuous necklace belonging to Catherine II composed of 26 emeralds was also part of the Albion Art collection. But shhh! … Nobody knows if these pieces still belong to him or if buyers have finally fallen for them.

The link with France

As Kazumi Arikawa’s clientele is predominantly Asian and Middle Eastern, he has opened a showroom in France to gain better visibility and to receive Western and especially American collectors. “This Japanese dealer has done a remarkable job of researching and preserving French jewelry,” said a representative from the sector. “A job that unfortunately nobody in France is able to do today”. And one that earned him the medal of the Order of Arts and Letters from the French Minister of Culture in 2007. Respect.