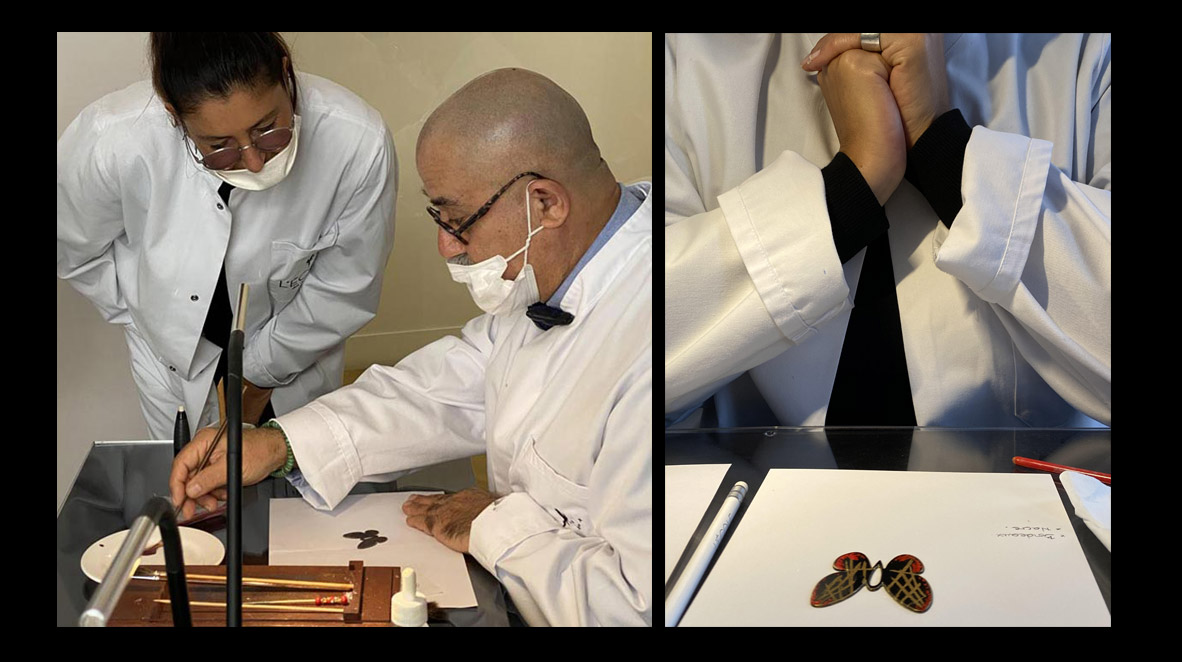 I invited Isabelle Stanislas, a famous Parisian architect, to the Urushi lacquer workshop organized by The School of Jewelry Arts. Here are her impressions.

Isabelle Stanislas. It is an ancestral Japanese technique made using the sap collected by cutting into a tree trunk. It was traditionally used to protect objects because it’s highly resistant. I discovered that it was also used to decorate Van Cleef & Arpels butterfly clips.

S.M. You have renovated a room at the Élysée, and designed the interiors of both Cartier and Zadig&Voltaire boutiques. Do you ever use lacquer?

Isabelle Stanislas. Generally speaking, I’m very interested in know-how and I like to understand how objects are made. I use lacquer to attract light – similar to the satin strip on a dinner jacket. In France, so few craftsmen have mastered this technique that I had to start with car body specialists!

S.M. So once equipped with the traditional tools of the master lacquerer, you went on to decorate a butterfly in black lacquer?

Isabelle Stanislas. On washi paper, I drew a pattern, using gofun a kind of white paint based on oyster shells. It’s amazing the precision it requires: you have to hold your brush perfectly straight to avoid any smears or scratches – just like in calligraphy! I then sprinkled my drawing with gold using a funzutsu, a bamboo wedged between the thumb and forefinger. Not as difficult as it sounds, you just need a little help! Fortunately, Franck was there to show us…

S.M. Tell me about your butterfly?

Isabelle Stanislas. I made up my own creation based on a few examples of motifs… It suggests the architecture of the Eiffel Tower. I was satisfied with a few touches of color because I generally don’t go in for color much. I especially favored tiny shards of mother-of-pearl: they form dotted lines around the bottom of the wings. I didn’t become a master lacquerer but I became familiar with the technique… which made me want to make another butterfly!

S.M. You teach at Penninghen, a Parisian school of graphic arts and design, and now you’re on the other side…

Isabelle Stanislas. I didn’t expect it to be such a nice relaxed experience. It’s so cute to leave with your butterfly. It will look great on its chain. Besides I’m going to give it to my mother whose birthday is coming up and before that I’ll of course show it to my daughter!