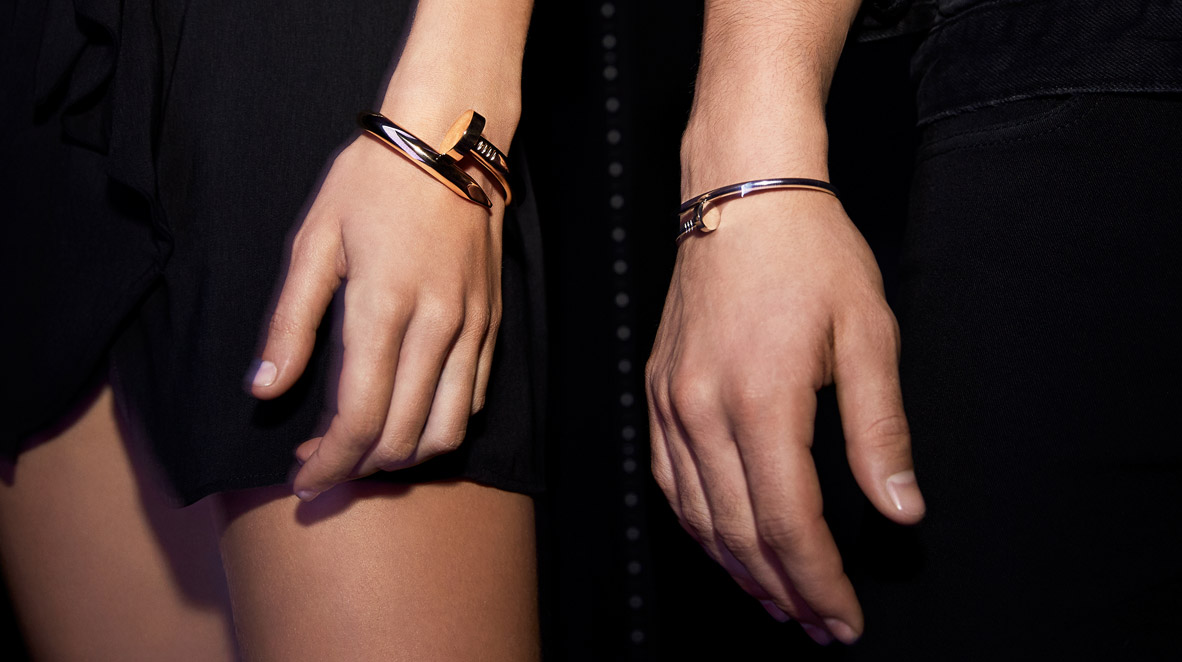 Eliminating the time-honored barriers between men and women is still an epiphenomenon in jewelry.

During 2019 Jewelry Week, two collections swept away the man/woman divide. One was the chains by Charlotte Chesnais and Ben Gorham, founder of Byredo. Formed from two types of links representing the feminine and the masculine, these are genderless. The designer gave a very simple explanation: “I wanted a collection that I could wear, and Ben as well. ” A bolder proposal came from Ana Khoury: the double large hoop earring in emeralds presented on a man – almost identical to the one in diamonds worn by the ladies.

Jewelry is essentially designed for women, and its communication as well. Apart from cufflinks, conventional jewelers sometimes propose dedicated collections for men based on the preconceived idea that jewelry that is too feminine or with too many stones will not appeal. Except for a select few, such as David Yurman, the result is distinctly stereotyped, lacking in power and energy. This half-measure hardly chimes in with the tastes of generations influenced by the style of Hedi Slimane and Virgil Abloh, and is light years away from the fashions presented during July in Paris by Jacquemus,  J.W. Anderson and Louis Vuitton, with androgynous men parading in full skirts, candy pink jumpers and flowery trousers.

Given this dearth of choice, men are dipping into 100% gold jewelry collection : Cartier’s Trinity, Clou and Clash, Van Cleef & Arpels’s Perlée, Boucheron’s Jack and so on, and turning to new jewelry brands like Marc Deloche, Mené and Le Gramme, with minimalist bangles, silver cuff bracelets and rings in polished or brushed gold. Those who love precious stones can try the Japanese label Ambush, whose designer Yoon Ahn (also in charge of Dior Men’s jewelry) promotes genderless pieces, or the French brand Persta. With the latter, rings are available in large sizes, including in mother-of-pearl, pearls and diamonds. A natural approach for the founders, the barely 30-year-old twins Olivier and Guilhem.

The no gender temple

Even if it is generally described as the specialist men’s jewelry concept-store, Madlords (a nod at Lord Byron, the celebrated 19th century dandy) proves to be the temple of genderless jewelry. The entire selection made by Serge and Caroline Müller is geared in this direction, not just the death’s heads and medals. Girls and boys alike love wearing neo signet rings with a central opal by Alexandra Abramczyk, fleur-de-lys embellished rings by Laura Sayan, and De Jaegher’s bracelets. Aside from the question of size, you might wonder why the site classifies its pieces by gender…

Ambassadors of the gender-defying

In his time, Karl Lagerfeld did a great deal for the convergence of genders in terms of jewelry, transforming brooches into tie pins, and adopting long chains (including Aaron Jah Stone) and diamond signet rings. He was followed by Pharell Williams. Today, Gherardo Felloni and Alessandro Michele (respectively the artistic directors of Roger Vivier and Gucci) are clearly decompartmentalizing genders, vaunting the virtues of elegant 19th century women’s attributes like tiaras, front panels with micro-mosaic cameos, fluid diamond drop earrings and the like.

Is jewelry finally becoming emancipated from the dictates of gender? Jewelers: a little more daring, if you please!