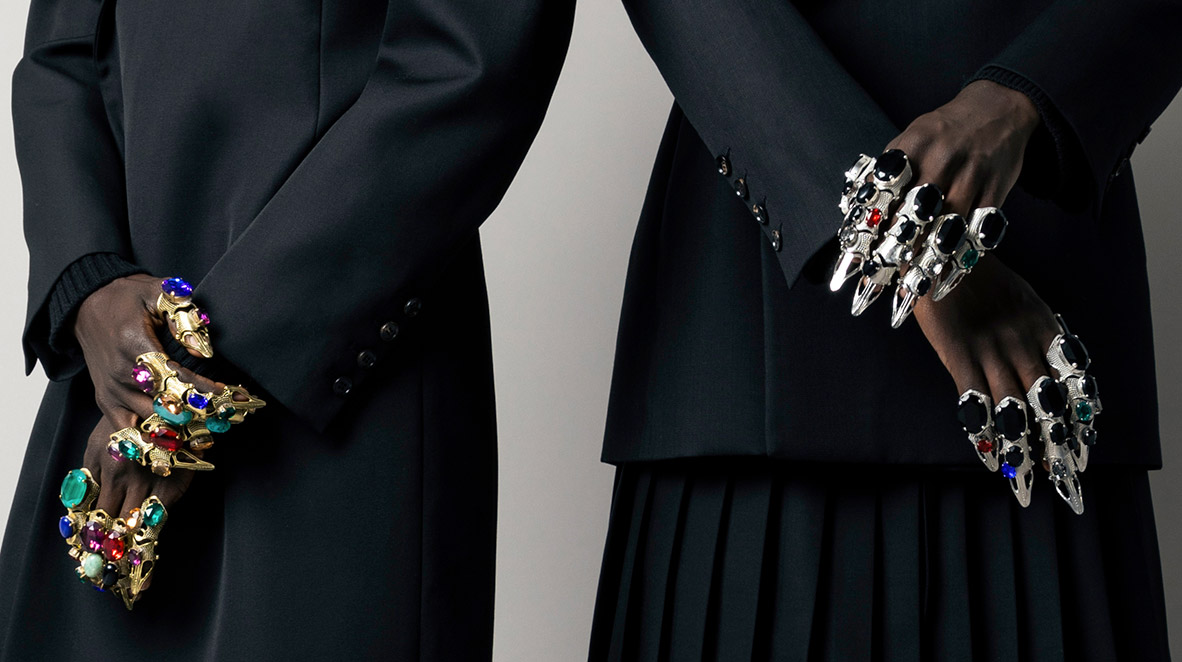 Forget timid rings, classic solitaires and even cocktail rings. New finger ornaments are here – like spectacular and fabulous extensions of a mutant body.

A fully articulated ring ending in a point entirely covers each finger of the hand. Meanwhile, at Merce Jewelry, a silver wire emerging from under the ring finger curves over the nail. At Angostura, it looks like gold has flowed between the phalanges of the index finger and the thumb. And these are not the most spectacular examples… A cap slipped on the end like a fingernail is sometimes extended by unsettling elements unfolding in space.

Metal as a second skin

Hardcore fans will choose models from the king of jewelry molded directly on the body: Taro Hanabusa is founder of the brand of anatomical jewelry Fangophilia and a dentist by training. He still practices in Tokyo, but obsessed with body modifications, now spends more time using his modeling techniques to make jewelry than making dentures! His pieces (which Lady Gaga, Marylin Manson, Niki Minaj or the rapper Cardi B. all rave about) could be used to repair living bodies. And why not tomorrow’s designer-prosthetists? About fifteen years ago, the designer Jasmine Alexander already came up with a jewel finger to make up for the one she was missing.

A more poetic version is the cap finger jewel in vermeil or silver as a piece of glove in gilded brass, bronze or silver. It can be found at Schiaparelli or at the Italian Angostura, the flesh and bone fingers disappear under trompe l’oeil golden sheaths, endowed with folds and fingerprints. Unless, that is, they have been dipped in a bath of gold, because they’re uncannily realistic. On the borderline with contemporary art, they remind us of  Caesar’s thumb and Lalanne’s galvanic copper finger sculptures for Yves Saint Laurent. Undulating foliage typical of their dreamlike universe unfolds at their tips. All that was more than 60 years ago and yet it’s only today that designers are inspired by it…

For Daniel Roseberry, artistic director of Schiaparelli, “jewelry is as much armor as ornament”. Her gold-plated fingers thus culminate in endless nails that metamorphose into undulating, threatening tentacles – as if ready to snatch the first person who passes by. Completely set with crystals cut like precious stones, EGONlab.’s rings worn in accumulation (one on each finger) are reminiscent of a knight’s armor going on a crusade. Meanwhile, the nails of Rohan Mirza, a hybrid between a jewelry designer and a nail artist, summon up aliens bristling with spikes, backbones, unidentifiable creatures swarming with claws, needles… Half-slug, half-caterpillar, these jewels send shivers down your spine.

Our bodies can be modified more and more easily. With these finger ornaments, jewelry designers are blurring the boundaries between the physical and the mechanical. They also connect us with otherworldly, dreamlike or fantastic worlds. One thinks of Edward Scissorhands in Tim Burton’s film, or of the gold finger and toe ornaments discovered in the tombs of the women of Tutmosis III more than a century before Christ. Made of pure gold (the color of the flesh of the gods), they were used for the ultimate journey.