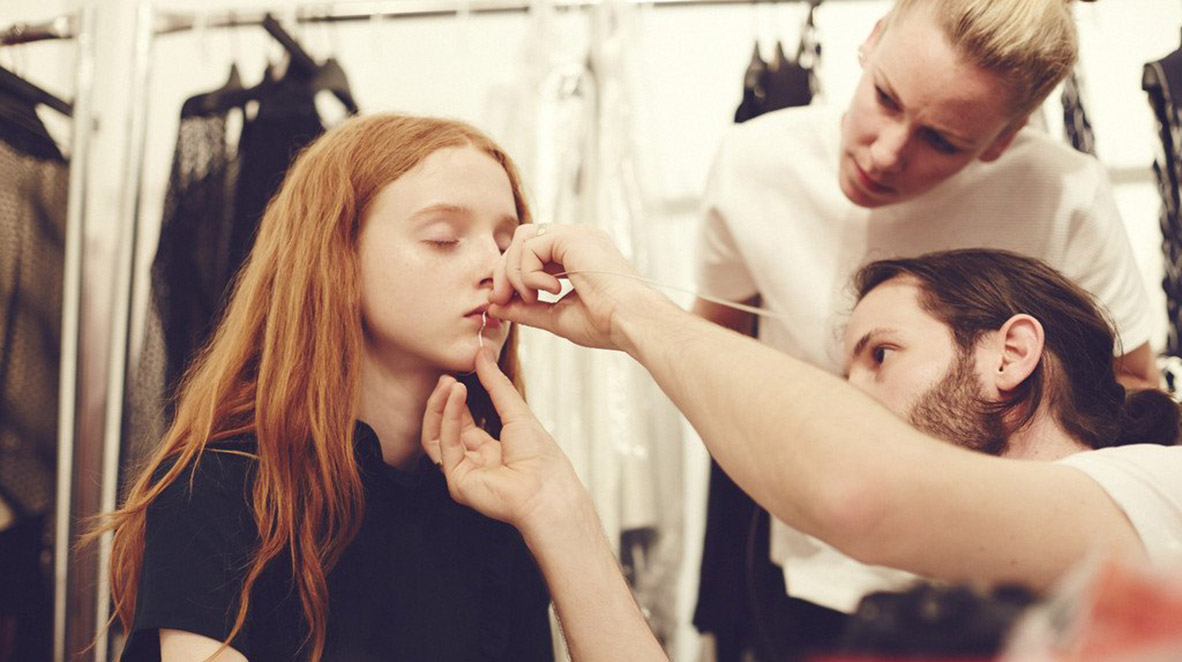 Jewelry that decorates the face is not often worn in the street and still remains an avant-garde phenomenon. But for how long?

Gold threads held by the ears streak the face and lose themselves in the nostrils. Others split the face in two or form cubes that frame it. In arabesques, they connect the nose to the ears. Jewelry that emphasizes the lips or keeps them apart. By Andrzej Cofta, they escape from mouth in a golden flow. As clips and studs sometimes set with pearls and rhinestones, they adorn the eyebrows and the nose.

This type of facial jewelry conjures up the underground and marginal worlds of drag queens and punks with their faces pierced with safety pins, or even that of the aficionados of sadomasochistic soirées. The designer, Alexander McQueen, was very fond of them and during his fashion shows we could see spikes as though inlaid in the flesh coming out of the mouths of his mannequins whose lips were apparently sewn together with gold wire. Enough to stop word and breath … In comparison, the false piercings in crystal arranged under the eyes and on the cheeks designed by Riccardo Tisci for Givenchy appear very tame …

In the works of the artist Markus Schinwald, metal structures are added to portraits of nineteenth-century bourgeois figures and evoke prostheses or barbaric systems for repairing malformations. Some create a queasy feeling, as they resemble instruments of torture. The works of the Turkish artist, Burcu Büyükünal, are in the same vein as they twist the cheeks and lift the chin creating deforming folds. The face becomes a theatre of modifications that border on transhumanism.

Demonstrating that our identity can be easily changed as well as the way others perceive it was already at the center of Gijs Bakker‘s work as early as the 1960s. One of the best-known pieces by this Dutch industrial designer is the wire structure placed on his wife’s face. Shocking and transgressive, this facial adornment is far from the jewel to investment in or a style that prevailed at the time. For Gijs Bakker it’s much more about experimentation and his conceptual approach remains quite isolated.

Facial jewelry is nowadays more and more frequently found among artists and designers emerging from the Saint Martins School, although it remains mostly unwearable for common mortals. They are more like statements and provocations and have not yet reached commerce or the streets. But they show a desire to break away from the eternal ras-de-cou or even piercings that have today become the custom. There still remains a need to find new directions and to conquer virgin territories. While the hand and its phalanges along with the ears have in recent years been largely annexed, the face itself still remains only partially explored.

Jewelry as an introduction

• If the face is perfectly symmetrical, the gold line splits it in two. The duo of Sarah & Sebastian came up with this idea for Dion Lee’s fashion show in 2016, for the Spring collection.

• Nose ring by Delfina Delettrez. Johanne T.’s is topped off with a thin chain that disappears behind the ears like a glasses chain.

• Metal elements slipped between the lips by Anika Smulovitz and Andrzej Cofta.