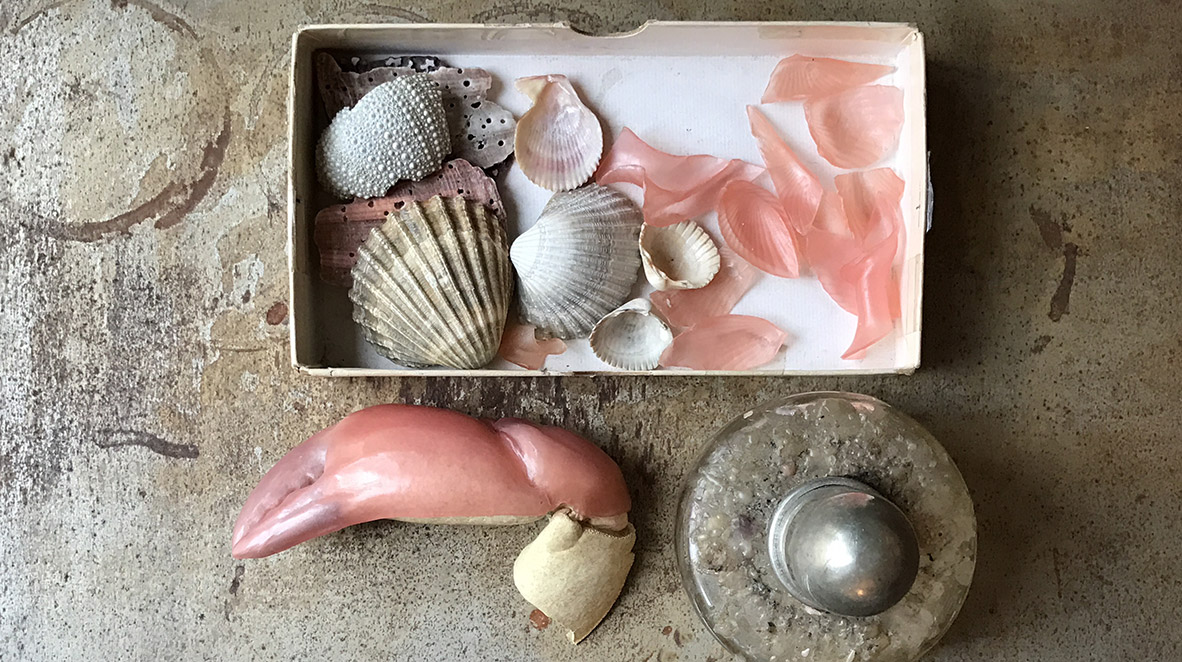 A trained archaeologist, the designer creates jewelry from elements bearing the imprint of time.

Until October 21st, some of your pieces are on show in the “Gourmandises” exhibition at the Naïla de Monbrison Gallery.

At first the theme proposed by Naïla de Monbrison left me perplexed, how to treat it without becoming figurative which is not my style? That’s why I opted for the nascent side of the joys of life. I express the joy, the vivacity, and the sparkling effect with my favorite materials that are frosted glass and rough stone. Colors like the green of the chrysoprase suggest those of candy.

Among the gleaned elements, sea glass is clearly your favorite material; you even say that it was “a gift from heaven”?

At first, I used mainly driftwood, and then I discovered frosted sea glass on the beaches of Cotentin. I had to do something with these fragments of bottles and jars. The weathered glass bears the memory of the sea and the passing of time. I fell deeply in love with its faded colors, its inner brilliance … It was the trigger of my new life and a new way of working.

You were an archaeologist, specializing in the medieval period. How did you arrive at jewelry?

Perhaps to make up for an unconsciously deliberate mistake: it seems that as a child, to get back at my mother, I threw her jewels out of the window! More seriously though, I’ve never had an answer to this question … Being an archaeologist is not very romantic; it is a tedious job of inventories and statistics. In fact, I was only interested in one thing: the buried materials bearing the trace of time, those that connect us to other experiences. I have always picked up lots of things like these shells we walk on without ever realizing that they are wonders of shape and texture.

Going beyond these obsessive materials, there is this lightness inherent in your pieces …

That doesn’t mean that I don’t produce oversized or structured pieces. My quest for lightness goes through mobile elements, masses of lines, plays of open and closed spaces, a touch of gold. I finish off a large, solid leaf with a single thread. On the “Empreintes” cuff, I leave no claws visible so that the two shells appear to lie on the surface. This lightness arises from the oppositions of the rough, the coarse, the irregular and the perfectly polished and shiny.

Does your approach make reference to Japanese culture?

I often went to Japan, which turned out to be a great source of inspiration. I have an affinity with its philosophy and principles like impermanence, the rapidity of gesture, nature, and the quest for simplicity, randomness. I recently discovered the works of the Japanese artist Ritsue Mishima that focus on organic forms creating distortions of light. It draws the life out of monochrome glass without it ever becoming too complex or busy. The exactness of her work touches me.

Why make only unique pieces?

The nature of these gleaned materials leads to this uniqueness because I never alter them. And then I was at the head of a company employing around fifteen people and I wanted to break away from the incessant rhythm of novelties and collections of which I was a prisoner. Moving on to unique pieces has been a way of reclaiming my work and reconnecting with another sort of discipline.