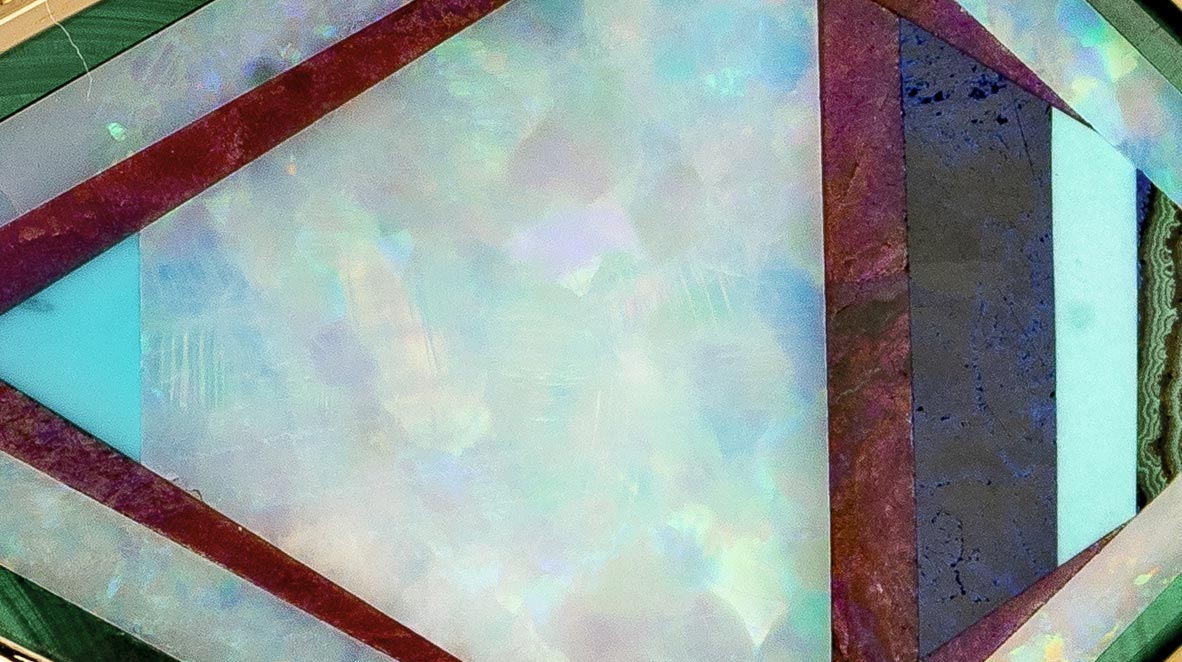 Presentations confirmed the dynamic energy of jewelry designers. These are some of my favorite pieces.

Mike Saatji, who comes from a family of Armenian jewelers, recently launched the Mike Joseph brand in 2016.  He himself is based in not Yerevan but Bangkok, where he is exploring the possibilities of the fine gold chain. Using it as a leitmotiv, he transforms it into cascades sparkling with diamonds, or architectural constructions like this cage cuff bracelet formed by geometric shapes fitting into each other, all emphasized by hundreds of tiny chains.

All designers have their own technique for personalizing jewelry, and Noor Fares’s is one of the most intriguing. Using a photo provided by the customer, an Italian enameller reproduces the color of the pupil exactly. A magnificent idea for a gift.

These pendants are a mixture of subliminal references to the Seventies, a talisman or a nod at the Grand Tour, the journey to Italy carried out by young people in the 19thcentury. The young Jenny Dee has them made by an Italian craftsman specializing in precious stone marquetry.  Malachite, lapis lazuli, amethyst and opal form exquisite colored pictures that work on both sides.

Marie-Hélène de Taillac’s new pieces should boost the appreciation of her Japanese fans and no mistake. They are so….kawaii. Inspired by the weather, her earrings take the form of a cloud in gold zigzagged by lightning, or decorated with tiny chains evoking rain. The major pieces come with colored stones reminiscent of a rainbow. One brooch is shaped like one, in fact, with moonstone clouds at either end.

Each season, the American designer Beth Bugdaycay comes to Paris to present her new pieces. And every time, it is an unalloyed pleasure to discover her medallions, new symbols and new ways of wearing jewelry. There are thousands of references, and you want to buy them all… Especially the new chain-brooch, which is fastened (by means of two pins) to a pocket flap, tie or shirt collar.

The guiding theme in Marie Mas’s designs is movement. With each collection, the young designer develops a completely new technique. The one here, which is particularly successful, consists of small tubes (topped with diamonds) integrated into the ring setting. These are mobile, and when you put the ring on, they rise to form a dome. We look forward eagerly to her next innovations.

And yet more movement… The Tourbillon collection in titanium and diamonds is a splendid group of kinetic jewelry. The bracelet – a joyous accomplishment – consists of different-sized rings fitting into each other. The wearer then becomes its driving force, starting their movement and dictating their rhythm.

And more movement still! Brazilian designer Fernando Jorge has constructed this earring evoking a cloud, using an articulated series of semi-circles in gold. It can be completely unfolded and worn in very long pendant form. You can also create your own version by adapting it to you own ear piercings.

A qualified architect, Lara Koulajian is hardly new to the game: her unique pieces have been exhibited in leading US galleries and with Naïla de Monbrison in Paris. She has decided to move out of her usual territory with more affordable pieces, like these asymmetrical earrings. My favorite version: the exquisitely refined models in silver and silver gilt.