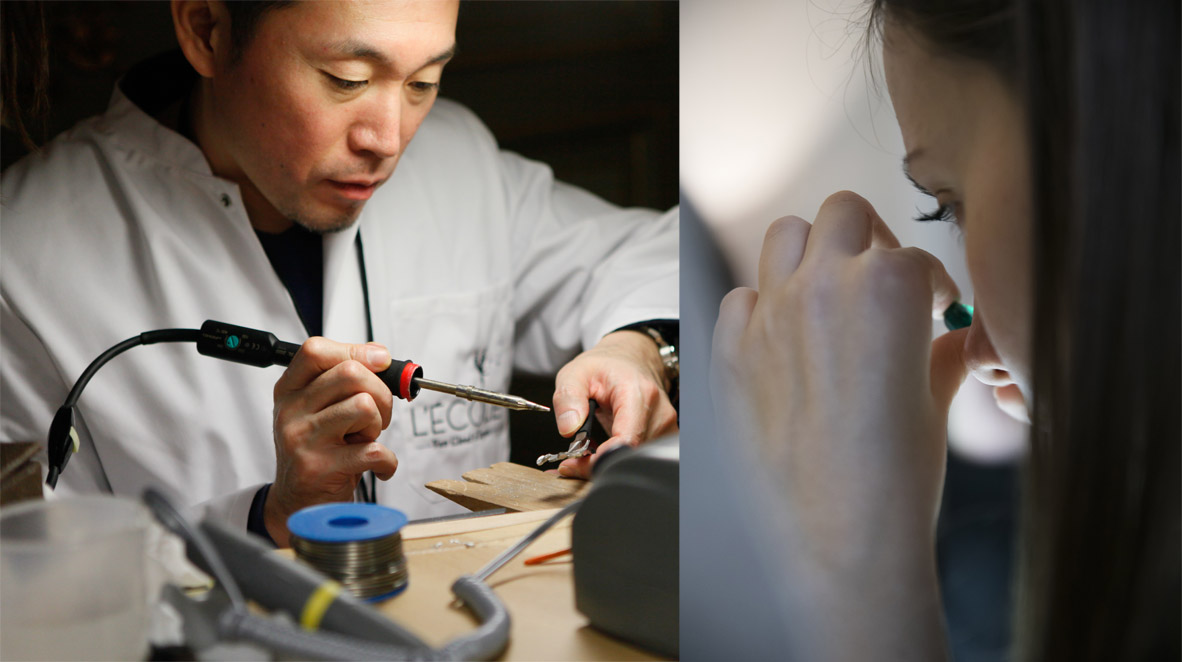 The School of Jewelry Arts offers a special “Back To School” formula for its courses and expert workshops.

Still housed in its beautiful mansion near Place Vendôme, The School of Jewelry Arts is now offering (from September to November) “Back to School” courses and practical workshops in very small groups: 6 people instead of 12. If anything, this enhances its core message: coming together, interactivity, conviviality between aficionados, whether speakers or participants, initiates or neophytes. Both diverse and affordable, these courses and workshops require no previous experience or training. Here are a few examples of what you can learn and experience…

When and how was jewelry born in the West?

The distinction between individual jewels, silversmithing and jewelry as a craft was first made during the 17th century. The art of enhancing the value of the stone became more precise: mounts became lighter in order to highlight the gems and the cutting became more sophisticated thanks to new inventions. The facets of the stones made it possible to reflect light like never before. Jewelry was born.

Why is the diamond the most coveted stone?

Because the chances of getting our hands on them were minute… First, its main component, carbon, had to be subjected to exceptional conditions of temperature and pressure in the depths of the Earth. The myriad legends that go back to Alexander the Great and the tales of Marco Polo in the 13th century also contributed to the aura and mystery of diamonds.

What are the most famous diamonds of all?

The course entitled “The Diamond’s Magic: Symbols and Legends” naturally includes the largest in the world: the Cullinan which originally weighed 3,106 carats before being cut into nine specimens, two of which adorn the British Crown Jewels. Other mythical stones: the diamonds set on the Peacock Throne of the great Mughals as well as those of the Crown of France. Among the latter, there is the Regent adorning the crown of Louis XV or the blue diamond of Louis XIV, brought back from India by the merchant Jean-Baptiste Tavernier – a favorite figure of The School of Jewelry Arts, to which it devotes a permanent exhibition. You will be able to discover his portrait, the reproduction of the 20 most beautiful diamonds he sold to the Sun King as well as the six original volumes of his memoirs. They are also digitized, which allows you to consult them in detail.

Apart from precious stones and gold, what are the main materials used for jewelry?

The list is almost endless! The “Around the World in Jewelry” course, conceived as a journey through civilizations, eras and artistic currents, attempts to draw up an inventory: non-precious metals, pearls, kingfisher’s feathers in Asia, ivory, wood, bear claws used from the 18th century onwards in America. Materials of animal origin meant we could appropriate the powers of the animal: courage, strength, etc.. From this point of view, Oceania is fascinating… In the State of Vanuatu, the boar’s tusk (in the center of the national flag) – an object of great economic and symbolic value – appears on the ornaments (often an arm bracelet) of the most powerful: the equivalent of feathers in America.

Art nouveau, with its curves and counter-curves – references to nature and Japanese inspiration – was born in France at the end of the 19th century. It quickly spread throughout Europe and across the Atlantic, whether in architecture, painting, jewelry, stained glass, etc. The great jewelers of this period were René Lalique, Fouquet (whose shop is kept in the Carnavalet Museum), Paul and Henri Vever, Mucha, Wolfers and Massiera. The “Introduction to Art Nouveau Jewelry” course also reminds us that this term came from the name of the gallery of Samuel Bing, the merchant and editor of the magazine “Le Japon Artistique”. To go further, you will be able to consult original copies in the library of The School of Jewelry Arts.

How many types of setting are there?

There are many ways of setting a stone to hold it in place: the closed setting consisting of encircling the stone with a thin strip of metal; the grain setting generally reserved for paving, baguette setting, etc. The most complex is the Mystery Set™, patented by Van Cleef and Arpels in 1933. Performed by a stonemason rather than by a setter, it makes the metal support invisible and thus enhances the value of the stones specially cut to fit into a gold mesh. It takes about ten years of training to master this technique and succeed in sliding sapphires, emeralds and rubies slide perfectly into the settings. But don’t worry: during this course, sitting at the workbench, you will be introduced to claw setting, the most widely used in jewelry.

This technique transforms the dried sap of various shrubs into a highly resistant varnish. Both protection and decoration, lacquer dates back to 4000 BC and appears at the same time in China and Japan. The workshop “Trying your hand at Japanese Urushi Lacquer” allows you to learn with a Japanese master, an urushi specialist, one of the oldest lacquerware techniques in the world. He will help you to make a beautiful butterfly!

What’s the use of gouaché in jewelry?

Coloring the drawing in gouaché is a crucial and fundamental step in the process of creating a jewel. Produced on a scale of 1:1, i.e. life-size, it is the reference document for the ten or so trades involved: model maker, jeweler, gemstone expert, etc. Preserved in the archives, it also represents the heritage of a jewelry house. Beyond their utilitarian application, beautiful gouachés are works in themselves. One skill course deals with light with plays of chiaroscuro, the other with color giving the illusion of the material. Time to pick up your brushes!

Is the jewel directly made of gold and precious stones?

In large houses and for complex pieces, there is an intermediate stage between design and jewel: the mock-up, in other words a scale model, which is also made to scale 1:1, with non-precious materials such as rhinestones, particularly malleable pewter or nickel silver, an alloy imitating silver. The model is used to engage in a dialog with the jeweler and to reveal any difficulties that might affect the jewel. And now, with file, pliers and milling cutter at the ready, it’s your turn.

The whole culture of jewels – or almost  – in a few classes at The School of Jewelry Arts… What an opportunity!

Where can you find jewelry courses?