Home > My Agenda > Cartier Islam exhibition madparis > “Cartier and the Arts of Islam”, a short exhibition guide for dummies 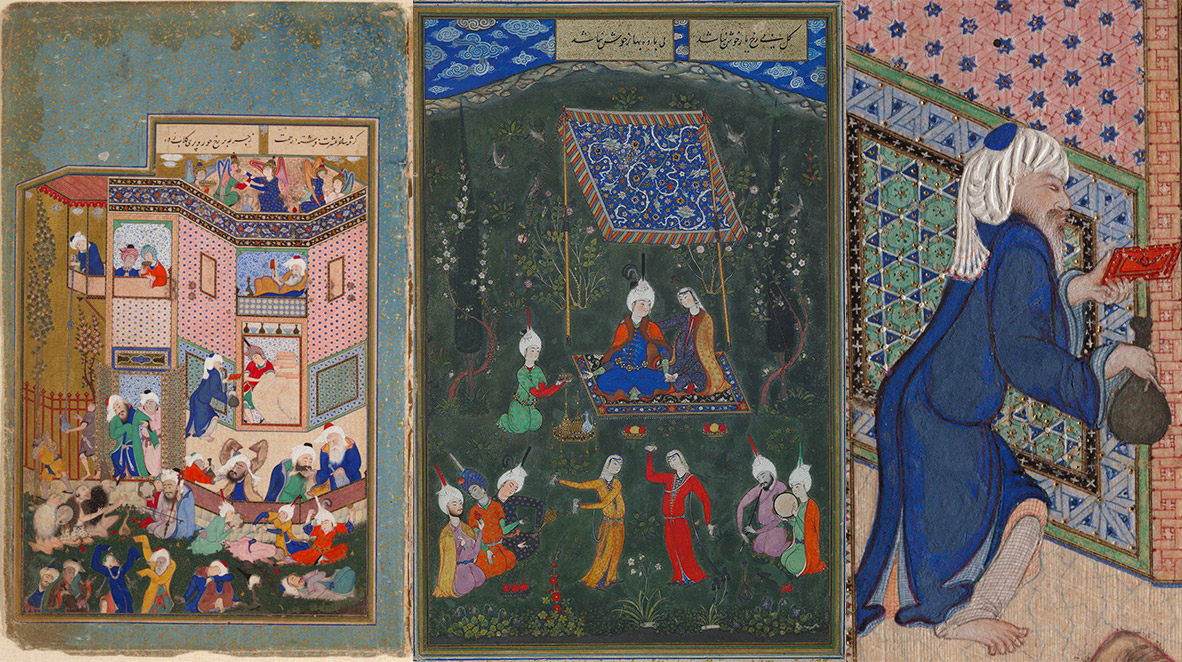 “In Cartier and the Arts of Islam”, we tend to look only at the jewelry, but the objects on display are also marvels – doors that open onto another space and time. So don’t be dazzled by the complex names (often linked to the Persian Empire) on the erudite labels. The mysteries explained.

Many of the objects in Louis Cartier’s collection belong to these two dynasties that ruled Persia (today’s “Iran”). Here are two important chronological landmarks: the Timurid dynasty (which lasted barely 100 years) began in 1405 with the famous warrior Tamerlane and ended in 1507 with Sultan Hossein Bayqara; the Safavid dynasty, which enjoyed greater longevity, lasted from 1507 to 1736 and reached its apogee with Shah (king) Abbas (see paragraph 4).

2/ The Diwan of Hafez

Once you understand that diwan means manuscript, everything becomes clear! Hafez is one of the great Persian poets. He exemplifies the importance of the bookish arts and especially of colorful and shadowless Persian miniature painting. The lacquer binding is decorated with courtiers refreshing themselves, recognizable by the red stick of their turban, while winged angels bear trays. In one of the miniatures, a couple of lovers are seated in a garden, in the shade of a canopy with exuberant arabesques. In the foreground, musicians and dancers stand by a stream lined with flowers. This diwan would have belonged to a prince of the 16th century, therefore a Timurid.

These are two schools of painting that we find throughout the exhibition, Tabriz being the older. Miniatures occupied an important place in Persian culture – a unique art linked to mythology and poetry. “Khosrow kills a lion with his bare hands”, “Iskandar leaves the land of water of life”, “Incident in a mosque” and so on. We can spend hours in front of each of them because each one features a story with tiny silhouettes that seem to float in space, bright colors, flashes of gold and silver, the absence of shadows … The infinitely precise details are fascinating: the pattern of a caftan, the brightness of the pearl, the petals of a flower in bloom …

This contemporary of Louis XIII transformed Isfahan into the “Persian Versailles”, he built mosques and palaces and encouraged the development of the arts: ceramics, carpets, engravings, etc. An important piece from the exhibition belonged to him: the smallest of the walrus ivory pencil boxes, a source of inspiration for Cartier. This pencil box was carved in a workshop in Deccan, i.e. Mughal (Muslim) India, then under the domination of the emperor Jahanjir. The rivalry between these despots did not prevent intense exchanges.

A great classic of Persian literature, a collection (khamsa means five poems) written by an immense poet known for his epics and sometimes compared to Shakespeare. This khamsa is a treasure of the book arts – it comes from the library of a 15th century sultan, the youngest son of Tamerlane. Louis Cartier lent this object for exhibition at the Musée des Arts Décoratifs in 1903.

This term refers to a gem-setting technique typical of Mughal India. In the exhibition, it is associated with an aspersoir (a container for sprinkling perfume) and a jade button. The principle: instead of using traditional claws to hold the stone, it is placed in a slightly larger cavity. To hold it in place, the space is then filled with pure gold (very malleable) using a stylus. This technique does not exist anywhere else, but it is similar to one of our own called “closed setting”.

This durbar (the word used in English) of 1911 was a gathering organized in Delhi to celebrate the advent of George V as Emperor of India. Remember that the colonization of this country dates from the middle of the 18th century. In the photos of Jacques Cartier (the youngest of the family), we see the crowd, processions with great pomp, salutes to the cannons, etc. George V and Queen Mary are seated on silver thrones inlaid with gold under a gigantic and flamboyant canopy. They wear ermine-trimmed robes and their crowns. George V’s crown was set with 1,600 stones, the Queen’s with 2,200 diamonds.

And now, enjoy your visit!

“Cartier and the Arts of Islam”, the Belle Époque of colectors