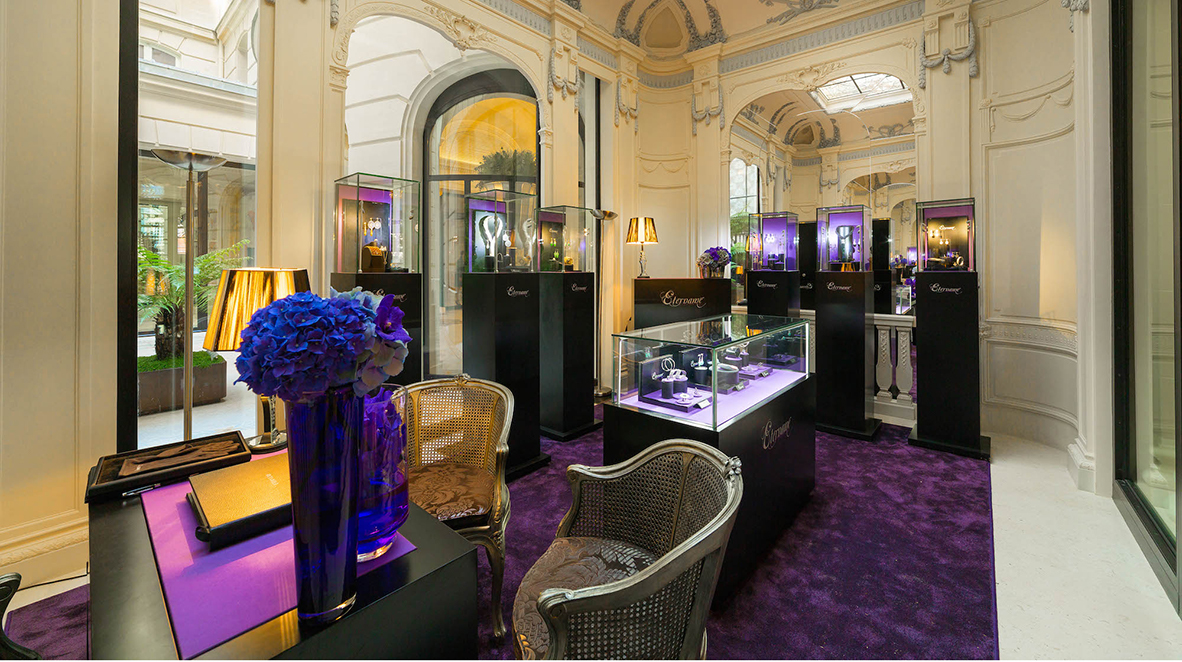 And what if you did your jewelry shopping in a hotel? Booming, these are the new places to shop.

Jewelers invest in palace-hotels. On Place Vendôme, the Ritz is inaugurating a new shopping arcade that includes the outlets of Alexandre Reza, Graff and Tasaki, a Japanese jeweler little known in France. Several of these, like the American Davidor or Suzanne Syz have showcase window displays. Some months ago, the Peninsula Hotel became home to the only Eternamé store, and has recently added an Omega pop-up store. Going to the Georges V Hotel one discovers the only Parisian boutique of the Austrian jeweler H. J. Sillam.

Historically, such jewelers as Van Cleef & Arpels, Cartier, Boucheron and Chaumet have always had display windows in large hotels because they share a similar kind of clientele. “I have the possibility of going to a client’s room in seconds and at any time of the day or night to sell a necklace worth several million euros”, says Sarah Besnainou, creator of Eternamé, which has multiplied its pop-up stores and set up at One & Only in Dubai, the Connaught in London and at Destino Pacha in Ibiza. Jewelers also use this as a way to test the market into which they want to enter, just like the American, Tiffany & Co. did at the Hong Kong Peninsula. Another to do this in the 1950s was the visionary, Brazilian jeweler H. Stern who set up shop at the strategic ports of call for cruise ships.

“Luxury brands seek out this type of outlet as the huge number of luxury goods sales to wealthy tourists, which is the second largest object of expenditure after art, is something they lust after”, unofficially stated one particular hotel. Increasing globalization and an acceleration of customer flow have created the same phenomenon that exists in airports. “A well thought out store is a real cash machine”, says one luxury player. And this is even more the case when the customer is captive, 25 km from the center of town or on an island in the Maldives.