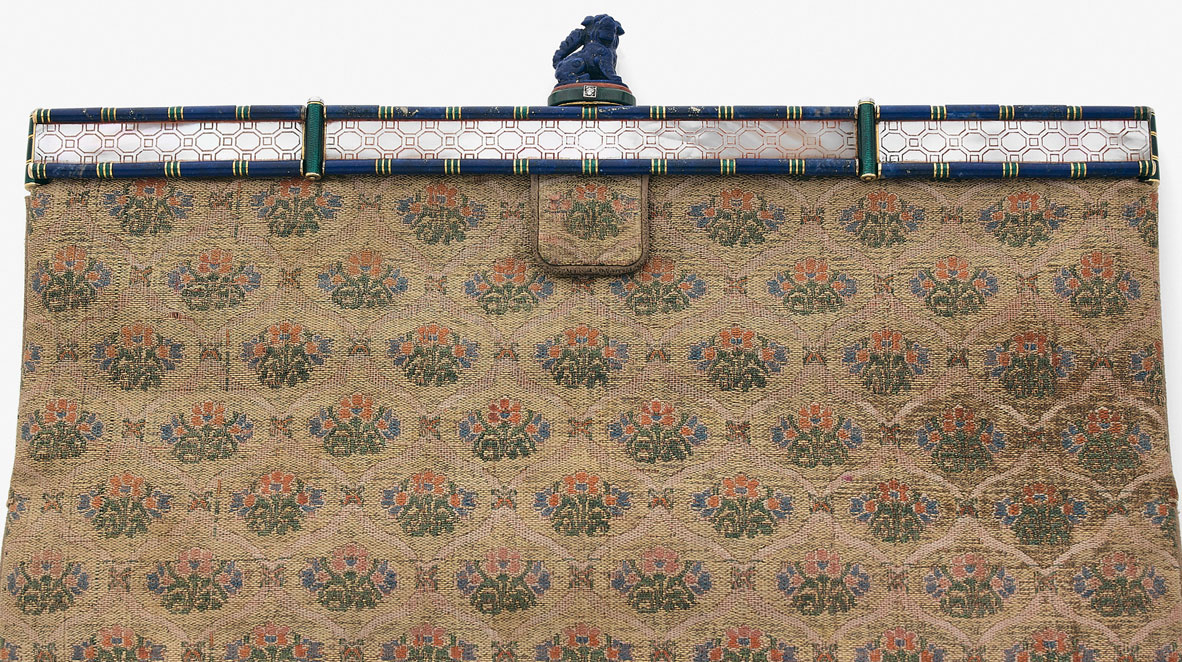 The Artcurial sale taking place at Monaco’s Hotel Hermitage on 18 and 19 July features some extraordinary jewelry items. These are the texts I wrote to go with them in the catalogue.

It is very rare to find jewelry by Vever: no more than two or three pieces turn up each year at auction. This pendant-brooch is typical of the Art Nouveau style inspired by women, nature, flora and fauna. In the pervading atmosphere of symbolism, Henri Vever dreamed up a pendant-brooch in the form of a woman-dragonfly: a twofold reading, and a new, almost disturbing form of beauty. Antennae appear in its twisting lines, extending into a garment composed of a geometric patchwork of blues and greens: a kind of cape that blends into the insect’s polychrome wings. Henri Vever captures the ephemeral instant of this metamorphosis through chased gold and enamel work, a technique he excelled in. Established in Rue de la Paix, this jeweler fascinated by the transformations of his time contributed to the emergence of a “modern jewelry” free from any historical reference. Though lesser-known than René Lalique, he was a major figure in Art Nouveau.

The instantly-recognizable Trinity is considered the Cartier piece par excellence. An in-house design, it consists of three rings in different-colored golds: white for friendship, yellow for fidelity and rose for love. In 1924, Jean Cocteau gave one to Radiguet. Now decidedly in the limelight, the ring became a huge commercial success. But it did not become an instant icon; that took several variants, including one in ceramic and a stylized version with three-colored baguettes. Over the years, it became a bracelet, a watch and a pendant. Some versions were produced in very small editions. It was finally associated with international events and figures like the Duke of Windsor. But never a mere fad, the Trinity continues as a timeless classic.

In the Seventies, jewelry was no longer worn only on smart occasions. Diamonds, emeralds and sapphires were abandoned for non-glittering stones that did not refract the light, like coral, lapis lazuli and malachite. Sophisticated and fun with it, jewelry became the prerogative of jetsetters, who wore long colorful necklaces over jellabas beside the swimming pool in Marrakesh. This new concept of wearability went hand-in-hand with the virtual disappearance of platinum and white gold. Yellow gold (traditionally associated with day jewelry) came to the fore, and was chased, crinkled, hammered and granulated. These golds textured by the hand of man did not come about by chance: they expressed an appreciation for time more than money, and were genuine manifestos against mass-produced products. The phenomenal importance given to craftsmanship in the Seventies makes more sense than ever today.

In 1968, precisely fifty years ago, the first piece in the Alhambra collection was created: a long necklace with twenty quatrefoil flowers inspired by the four-leafed clover. In crinkled gold edged with small gold beads, it reflected the mood of the time: a longing for elsewhere and freedom. “For every day, and for women of taste,” chanted a contemporary advertisement. The 1970s versions of this necklace are the most sought-after. As time went by it was produced in dozens of different materials, like coral, lapis lazuli, tiger’s eye, white or grey mother-of-pearl, onyx and malachite. There was also a version in snakewood. To be collected and accumulated without moderation.

American jeweler Harry Winston has always had a special relationship with emeralds. When he was twelve, he bought a green stone tucked away in a pawnbroker’s window for 25 cents… It was in fact an emerald, which he sold for $800 two days later in his father’s store. This rivière features five rectangular and pear-shaped emeralds surrounded with diamonds in various sizes. A speaking illustration of Harry Winston’s stylistic vocabulary, this perfectly-proportioned necklace resembles a garland – his favorite motif. The minimum use of metal creates the illusion that the stones are floating in the air (the majestically arranged stones conceal micro-articulations). This unbelievably flexible necklace literally collapses into the hand.

Codognato: the soul of Venice

The Codognati are natives of Venice: the family has been established there since 1866. For four generations, imbued with the heritage of the Serenissima, with its classical palaces, golden cupolas and mosaics, the Codognati have been reinterpreting former times, mingling components of the Byzantine, Gothic, Baroque and Classical marvels around them. Truly amazing curiosities come from this company: cameos engraved in rock crystal, death’s heads in polychrome enamel recalling the brevity of life, emerald-eyed golden serpents entwined together and Moretti with coral or ebony faces wearing majestic turbans. Dream-like jewels for eccentric, daring, elegant women from every continent, including connoisseurs like Coco Chanel, Diana Vreeland, Countess Volpi and Queen Victoria.

The silver Bone bracelet is considered so innovative that it now features in the collection of the British Museum. Developed during the 1970s for Tiffany & Co, it hugs the curves of the wrist and adapts to bony protuberances. Like a shoe, it is not interchangeable. Some, like the one here, are designed for the left wrist; others for the right. In perfect osmosis with the anatomy, the Bone has the feel of a futuristic sculpture. It should be seen as the first “body-conscious” jewelry piece, which has spawned a plethora of models today.

This bag is a gem in silk brocade. Its mother-of-pearl mounting is topped with a clasp featuring a lapis lazuli Fo dog. That it should appear in this sale in perfect condition is a positive miracle, because the extremely fragile fabric does not take kindly to handing. A genuine museum piece, its polychrome Oriental-style floral motifs reflect Cartier’s taste at the time for distant cultures. The brothers Louis and Jacques traveled a great deal and were keen collectors of Egyptian and Persian art. Large enough to contain a handkerchief, a little money, a lipstick and a powder compact, it revives the ambiance of the Twenties, when women dressed in Poiret were moving towards emancipation. A world of conventions, elegant gestures and long-forgotten rituals.

Swept along by the craze for contemporary art and the exhibitions of the Diane Venet collection, artists’ jewelry is on a roll. It came to the fore in the 1970s with Jean Dinh Van, who exhibited César’s breast-pendant, based on a miniaturized cast taken from a Crazy Horse dancer. With jewelry, artists came up against new constraints. César compressed not only cars but also chain bracelets, rings and necklaces, which he turned into pendants. Picasso made seashell necklaces for Dora Maar and gold medallions based on his ceramic models. Arman accumulated watch components and micro musical instruments. More recently, Jeff Koons reduced his Rabbit, while Jacqueline de Jong worked with potato sprouts. At no time was it a question of mass-producing the jewelry: each piece is generally a one-of-a-kind piece or part of a small edition.

Today, Japan has a particular fondness for diadems – perhaps because the country has a long tradition of hair jewelry: the all-enveloping kimono with its ultra-long sleeves leaves little room for bracelets and necklaces. It appeared for the first time in 1889, during the Meiji period: at official occasions, the Empress abandoned her traditional dress for a court mantle and diadem to rekindle relations with the West. The greatest diadem collector, who triggered the craze for this jewelry item in the 2000s, is Japanese himself. Meanwhile, young women frequently wear them on their wedding day, and some Tokyo jewelers even loan them to their customers. So this one could very well take off for the Land of the Rising Sun …