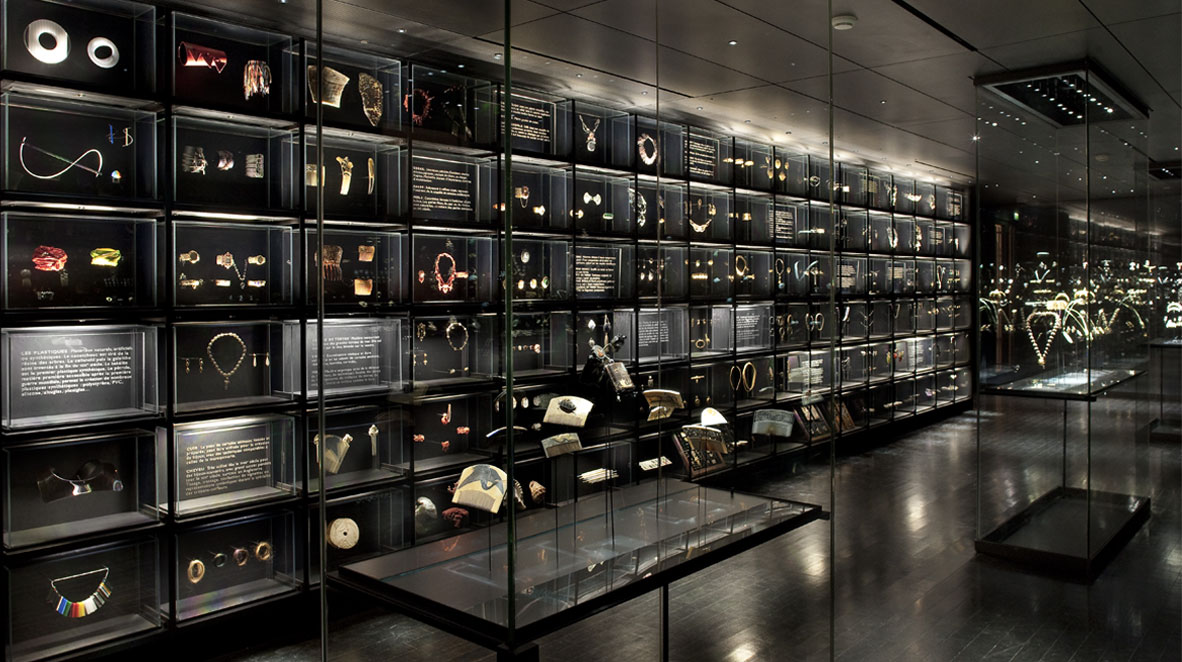 The Musée des Arts Décoratifs in Paris has a collection of over 5,000 necklaces, bracelets, brooches and rings. A thousand of them are presented in two rooms of the gallery des Bijoux. A presentation of the historical part in a video with a commentary by the chief curator, Evelyne Possémé.

A journey from the Middle Ages to the present day

The chronological approach provides beginners with a clear history of jewelry, especially French jewelry. It starts with a 16th century boxwood rosary bead and ends with an avant-garde necklace by Marion Delarue:  a lacquered inner tube. Between these two extremes, we discover jewelry that has no equivalent in the world.

This is one of the few collections in France open to the public. Brooches, devants de corsage and pendants illustrate the century’s exuberant creativity. We find the bow as a motif everywhere – surrounded with leaves, formed of one or more knots or decorated with shells. The fashionable stones then were diamonds, as new deposits had just been discovered in Brazil, and emeralds, brought back from Colombia by the Conquistadors.

The gallery des Bijoux certainly illustrates the eclecticism of this century, inspired by historicism, Egyptomania and a penchant for Antiquity and the Middle Ages. All the big names are here: Morel, the forerunner to Chaumet, Alphonse Fouquet and François-Désiré Froment-Meurice, who takes up an entire showcase. The gallery des Bijoux also has the finest collection of pieces by Jules Wièse.

The Vever and Lalique collections

The Musée des Arts Décoratifs boasts some fifty pieces by the Vever company and one of the world’s finest collections of jewelry by René Lalique (the other is in Lisbon). They all illustrate the Art Nouveau style, with its sinuous, Japanese-style lines, its fantastical representations of women hybridized with dragonflies and flowers and its enamel work. Another inestimable treasure trove consists of pieces made by Lalique for Natalie Clifford Barney, often with bat motifs, symbolizing lesbianism.

This typically French overview does not exclude foreign jewelry. In the historical part, three central showcases are dedicated to:

– Chinese jewelry, including a comb with kingfisher feathers.

– Moghol pieces, including an archer’s ring with the seal of Shah Jahan

– A collection of Japanese combs and inro: the only jewelry worn with the traditional kimono.